There are no points for second place! 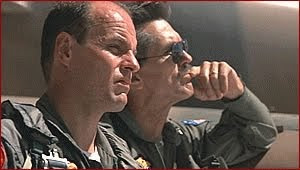 Sunday was an early start because Darren had promised breakfast and I wanted to see how the festivities of Saturday night had concluded. Good as his word, Darren was frying up some haggis in honour of Tim and Graham (members of ETC Team Scotland) who were staying with him, sadly neither of them were feeling up to the task so it was down to Darren and I to polish it off. The explanation of the events of the night before was vague but included something about a Lebanese girl, the legendary Maelstrom barman that is Josh and far too much alcohol!

So we very quietly set off to Maelstrom and the knock-out stages of the Tournament. Thanks to my heroic efforts in the last pool I’d been promoted to the Cup bracket (the third of four just so you don’t think I’m making too much out of it) and I was facing off against the Chaos marine player I’d faced in round two on Saturday. This time I knew to be a bit more careful when exploding vehicles close to masses of boys clumped up for combat! Fortunately my opponent made it much easier for me by starting both squads outside of their transports thinking that the extra fire-power would be useful in whittling me down before I got to him, not a bad theory but he had not reckoned with the fickle nature of the dice gods!

The tale of this game can be told by the polar swings of luck we experienced, my opponent could not roll a 3+ save for love nor money and I seemed unable to roll anything below a 5. Needless to say it got very one-sided rather quickly and I managed a tabling before time was called. A thoroughly unfair result for my opponent who deserved better as he had ably demonstrated the day before but the dice royally did him over this time. All I can say is, “It happens to us all!”.

Through to the semi finals and I faced my bogey list, Mech. In this case it was a beautifully painted Mech Lamenters (Codex: Blood Angels) army with a unit of 5 Death Company and a Chaplain in a TL Heavy Flamer Razorback, 5 Devastators with 4 Missile Launchers with a TL Heavy Flamer Razorback and a Land Speeder with a Multi Melta. Frankly I pooped my pants when I saw this because I really didn’t have much of an answer for its speed or the amount of armour it contained or its 2 TL Heavy Flamers, forget about the Devs, there was almost no chance I would reach them.

As it turned out this was probably the best game I played all tournament and I expect if you asked him, my opponent would say it was the worst game he’d played all tournament. He went first and made two critical mistakes on turn 1, he rushed his empty razorback straight at me (18”) and did the same with his speeder, my Shootas wrecked the speeder and my Sluggas charged the razorback but were only able to shake it. Queue turn two and the game-losing mistake, my opponent only backed his razorback off 12”. Needless to say the Sluggas’ second charge was more effective than the first, with the Claw exploding it and I caught some luck here with only a 1” explosion, catching just 5 guys.

On the other side of the table I was positioning my Deff Dread to protect my Shootas from the Death Company Razorback so he tried to come around to take on the Sluggas. The game ended with this razorback surrounded by both squads of boys as time was called, I’d won and didn’t want to risk an explosion killing off my Boys so we called it there. I really felt like I’d played a great game but my opponent had had a nightmare, I think if we did it again he’d have had far less trouble dealing with my list but as it was I was through to the final against a familiar face!

And so it was that Simo and Fudal faced off against each-other for all the marbles in the Cup tournament at Summer Skirmish 2011. Mick’s Space Wolf army comprised two 5-man Grey Hunter Squads in TL Heavy Bolter Razorbacks, a Rifleman Dread and 4 Long Fangs with 3 Missile Launchers. I took first turn and set up centrally using a ruined tower in the middle to afford me some cover and Mick deployed mostly in a refused flank over to my right-hand side but with his rifleman directly opposite my Deff Dread. The Ork advance made it to halfway before it started to suffer from the firepower, firstly the Dread was immobilised 7” away from the rifleman and I made the decision to split off the Mek to try and repair it and give it cover to protect VPs, however this left the Boys stranded without a cover save and the weight of fire took its toll. I managed to blow up a Razorback and take the two Grey Hunter units down below half strength but by the end of the game all I had left was the immobilised Dread and the Mek.

A clear and well deserved victory for Mick and his Space Wolves, now I just hope he plays in the Club Tournament despite the frankly ludicrous comp restrictions that have been put into place. I wont put them into effect if we play mate.

Also of note was a typically jammy performance by Darren and his “Gun-line” Orks in winning the Plate final (the 2nd tier competiton). How anyone can make shooty Orks work is beyond me but he played a lot of good tournament players and they were found to be wanting. As for Graham … let’s just say Graham will be back!
Posted by Unknown at 13:55