After the Space Wolves' lightning raid against the heart of the Tyranid encampments, the Imperial forces draw up reserves to begin a systematic process of alien extermination...


Victory points – the player to destroy the highest value of his opponent’s army is awarded 10pts. Vehicles with depleted hull points and units which have suffered any unsaved wounds are worth half-points.


(NOTE: Tabling your opponent automatically gives the winner a 20-0 victory!).

The winner of this battle has dealt a massive blow to the losing army, decimating their remaining forces and critically limiting their backfield supply chains.

The winner gains the ability to force their opponent to re-roll any or all reserves rolls in a single turn of the next game.
Posted by Grazer at 23:13 1 comment:

The Tyranid creatures are now dug in and deeply entrenched in the cities and fields of the world. The Imperial forces must strike to eliminate key strategic points in the enemy line, to break the stranglehold on their besieged lands… 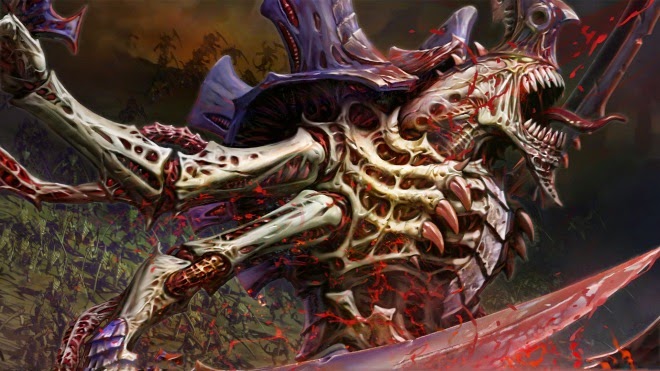 
Tyranid player must take 3 buildings as part of his army


4pts per building * occupied by at least one model in your army.


* Note – if a building is destroyed, it must be replaced by ruins. 4vps are awarded to the player who has sole, uncontested occupation of these ruins.


The winner of this game has made a critical breakthrough in the enemy lines, and now has the advantage of consolidating his own defences. In the next game, the victor of this mission gains a free Aegis Defence Line. If he chooses, he may spend points from his usual allocation to buy upgrades, as normally allowed for the Aegis Defence Line.
Posted by Grazer at 16:58 No comments:

Having launched their invasion forces from the bio-ships of the hive-fleet, the Tyranid forces now battle to secure a beach-head on the frozen world of Svellgard. The alien hive mind directs it's forces to spread out, in a dual-pronged effort to both consume bio-mass and to safeguard their own vanguard from counterstrikes from the still-reeling Space Wolves... 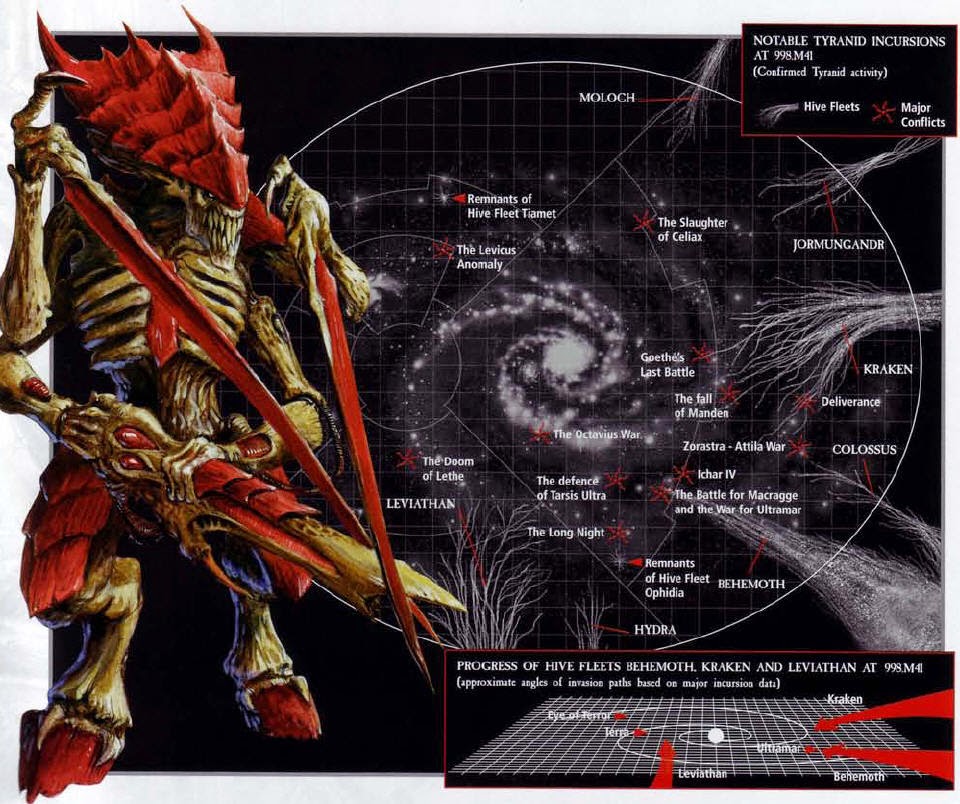 
The players are attempting to gain undisputed control of the three 2’ x 4’ sections of the board. This is achieved by having at least one model from a unit on a 2’ x 4’ section of the board, with no models from the enemy army on that section (unoccupied fortifications do not count as enemy models for this purpose).

4VP’s awarded for each uncontested 2’ x 4’ section of the board completely occupied by at least one unit in your army. A unit can only claim control of one 2’ x 4’ section (owning player’s choice if a unit straddles two or more sections).


(NOTE: Tabling your opponent automatically gives the winner a 20-0 victory!).


The winner gains, for use in the next game, either:

A one-off, optional +/- 2 to a single reserves roll,
or,
One unit may be given the Infiltrate special rule.
Posted by Grazer at 21:52 No comments:

Having spent 2014 being rightly teased for being uncharacteristically spammy and trying to be competitive in the UK 40k tournament scene, I have decided that the time is right to launch into a short campaign to get back to fluffy ways with my Tyranid Hive Fleet, Nemesis.
Fellow 'First Company Veterans' club-mate Duncs and I have decided to play a series of games based around a Tyranid invasion of a Space Wolves outpost moon. I have knocked up seven sequential missions, where the result of each has an impact upon the next. These are fresh off the drawing board - I only started putting pen to paper on Wednesday - so they may need some tweaking, but I'm hoping they are good enough for us (and our wonderful Claws & Fists readers!) to try out immediately. If you do get the chance to playtest any of the missions, please post (constructive) comments below, but please remember these are intended for friendly play and are not designed to be perfectly fair or balanced!
So, without further ado, here is the campaign introduction and the first mission...
INTRODUCTION
The moon of Svellgard, in it’s slow orbit around the ice world of Frostheim, is a vital link in the defences of the star system of Fenris. However, unlike it’s parent-world, Svellgard is a lush, verdant globe brimming with both carnivorous plant and animal life. It is this richness of bio-mass that has made Svellgard the target of a splinter-force of Hive Fleet Nemesis.
As the Bio-Ships divert their course toward Svellgard, the Tyranid hive-mind becomes aware that their presence has not been detected. The splinter-fleet glides silently into orbit, eagerly anticipating the rich pickings that lie in wait…
GAME 1 – INVASION
On the Imperial outpost Omega-K12 on Svellgard, a woefully small garrison of Space Wolves mans the orbital defence laser batteries there, tending the servitors and monitoring the skies for signs of impending attack from the chaotic forces which issue forth from the Eye of Terror. Much later, it was noted with bitter regret that the threat came not from that spacial warp rift, but from the freezing void of deep space.
Suddenly, and with no warning, the vanguard elements of a Tyranid invasion force spewed forth upon the unsuspecting moon. Tyrannocyte spores descend, eerily silent as they deliver their deadly cargo to the surface below. Meanwhile, great beasts swoop down on tattered leathery wings, spitting parasitic death from grotesque biological mutations symbiotically attached to it’s monstrous parent…
SET-UP:
To represent the hive-mind choosing their preferred landing site, the Tyranid player places the terrain on the board. Each 2’ x 4’ section should have D3+2 pieces of terrain on them.
The Imperial defender then chooses board edge and deployment type.
ARMY CONSTRUCTION & RESTRICTIONS:
The Imperial player must choose a single fortification as Part of their army list.
All Tyranid forces must start the game in reserve. Any units with the Deepstrike rule must enter the game via Deepstrike; all other units enter the game from reserve in the normal way.
The Tyranid player may not take any fortifications.
OBJECTIVES & VICTORY CONDITIONS:
Primary objective (10pts): The Tyranid player wins by destroying the Imperial fortification.
The Imperial player wins by preventing the fortification from being destroyed.
Secondary Objective (7pts):
‘Modified’ Maelstrom Cards (see Caledonian Uprising 2015 rules pack – thanks, Tim King!)
Tertiary Objectives:
First Strike (1pt)
Slay the Warlord (1pt)
Line Breaker (1pt)
(NOTE: Tabling your opponent automatically gives the winner a 20-0 victory!).
OUTCOMES & BONUSES:
If the Tyranid player succeeds in destroying the Imperial fortification, he gains a single orbital bombardment to use in the next game. The orbital bombardment is fired at BS3. It is strength 7, AP-, Ordnance Barrage D3, Large Blast, one use
If the Imperial player prevents the destruction of the fortification, he may give the Interceptor special rule to one unit, for one game turn, in the next game.
Posted by Grazer at 23:18 4 comments: