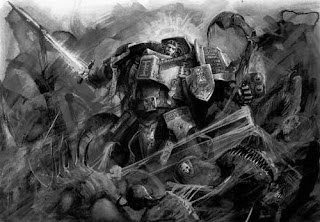 I've been doing a lot of thinking about what army I want to take to the July Throne of Skulls. Since my first Tournament over two years ago I haven't deviated from taking Wolves to a tournament and they have all been pretty samey, Rune Priests, Grey Hunters, Long Fangs, Rhinos. Its getting a bit boring if I'm honest.

So I have been thinking about two other options, the first being Grey Knights
so pros and cons
Pros
Cons
Heres the list for your perusal

So the other thought is Necrons
Now I have no experience with the army, I still haven't played them or used them so it makes it difficult. I do know from reading blogs that they are a army that while good are hard to master. I also no from my own experiences of winter TOS and reading the break down of armies at the Spring one that there wasn't many Necron armies

So Pros
Cons
The list I have been thinking about starting with and then modifying as I look into the play style comes courtesy of Venerable Brother on the Sons of Sanguinius Blog and can be found here.

My big worry with this list is lack of heavy and consistent Anti tank, I've read over the codex entries a number of times and although I know other than Scarabs necrons can pop transports I just find it difficult to see. It is 5 AV 13 vehicles which is never nice to face at 1500 points.

My main thing is thinking would I mind facing this list with my Wolves, I wouldn't like it because I don't know enough about it but seeing those Warriors out in the open I'm not sure if I would dread it. Perhaps that is just the mindset I am in after all this time playing Marines that sit in their metal pill boxes and try and make it through the early turns.

I am really unsure on what to do readers and fellow bloggers, something new or something old? Would love your advice.
Posted by Unknown at 10:09