This weekend Hive Fleet Nemesis descended on Maelstrom Games in for Alex Brown's Blog Wars III. This is a friendly tournament which Alex runs twice a year for members of the Blogosphere (great word!) and is always a very enjoyable day. This year was no different.
I had every intention of taking my Squats-as-Imperial Guard to this year's tournament, however my progress has been as slow as a Squat in a 100m sprint. Ahem. My excuse is that my girlfriend and I have just had a baby (5 weeks ago) so I guess that mitigates things a bit. That said, I have been talking about these Squats for three years now, and I'm fairly sure babies don't take that long to arrive, so perhaps I can't use that as a reason after all. So instead, I took my tried-and-tested Tyranids.
The army list is fairly settled now, with only minor modifications being made here and there - for example, I've dropped a unit of Zoanthropes and replaced them with Hive Guard, as I find that Zoanthropes are just too unreliable when faced with Grey Knights and other psychic defences. My other recent change is to replace a Trygon with a drop-podding Carnifex with Brain-Leech Devourer and Heavy Venom Cannon. This unit really adds to my ability to crack tanks open, ready for the Genestealers and spawned Termagants to eat the fleshy goodness inside. This decision caused a few raised eyebrows this weekend, but I find Trygons are just too big and obvious a target without having a strong ballistic threat to use whilst they spend a couple of turns getting into combat. 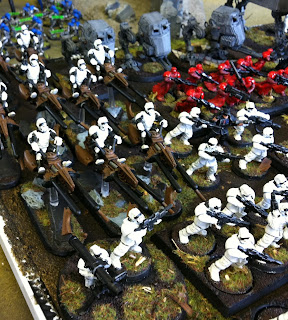 The last thing to mention about Blog Wars III is the stunning armies that were on display. The best two by far were two Star Wars themed Imperial Guard forces, one largely Imperial and one fully . Unfortunately I didn’t get any pictures of the Alliance X-Wings (counts-as Vendettas) but I did a couple of pictures of the former list. My particular favourites were the Rebellion heroes on display in the Command Squad and the Imperial Speeder-Bike riders.
The other force of note was a full Jokaero army! The list consisted of several squads of monkeys mounted in Chimeras, supported by Heavy Weapon-toting gorillas. Simply brilliant!
SHORT PROGRESS
Finally, a quick word about my progress with the Squats-as-IG army I’m working on. I have now got five tank chassis’ and guns built and part-painted, which will go on to be two Hydras, a couple of Medusas and a Manticore. I also have two larger Ramshackle Games’ tank models made up and part-painted, which will be used as either Leman Russes or Manticores, but only at Maelstrom tournaments as they are non-GW models. 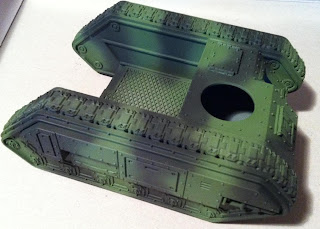 Once these are finished, I will be respraying the two airships (counts-as Vendettas) and four Termite Tunnellers (probably counts-as Chimeras or even Hellhounds). Then I will finish off some more infantry – I have around forty Squats painted so far, and I’ll probably need around double that amount for any competitive list.
As far as army list, I have already posted my target list on my Rogue Trader blog. However, I will definitely be tweaking this list when 6th edition arrives in around four weeks’ time, so watch this space!
Posted by Grazer at 19:25