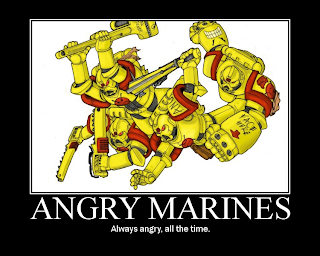 Grazer offered to give me a game this Thursday and was happy for me to proxy my little heart out to try out a Khorne CSM/Daemons list I’d been thinking about for the Age of Armies project. So, I’ll just dive straight into the list (and the proxies!):

The mission was The Relic with Hammer and Anvil Deployment. I elected to go first and started everything but the Helldrakes and the Bloodletters on the board. The idea was to get all my fast units across the board as quickly as possible and give Grazer too many targets to take out in two turns, by which time I would be on him. The Bezerkers and Soul Grinder would follow behind to claim the Relic and provide a second wave to fill in for the inevitable casualties in the front row.

By and large the plan worked well, however the casualties to the initial advance were severe. My Lord and the Spawn unit to which he was attached, were dead before they got into combat and the Hounds could only put two Hull Points on a Chimera before they bit the dust – thus giving Grazer 1st Blood and Warlord. The Bloodthirster took two wounds and was grounded by the first volley of fire that hit him causing a third wound, the next unit to open fire on him took another wound off leaving him on just a single wound and I felt that this was a point on which the game could swing against me.

Fortunately for the Bloodthirster did not take another wound for the rest of the game but he sure did draw some fire! Along with the Greater Daemon of Khorne, the only other unit to make contact with Grazer’s front lines from my initial first wave, was the Maulerfiend but between them they laid waste to the Squat artillery over the course of about 3 turns.

The Bloodletters never got into the fight thanks to a Deep Strike mishap placing them miles away from anything. Similarly the Cultists were just hanging out in a ruin trying not to get killed and never got involved. The Bezerkers did their job and secured the Relic eventually getting it back to the safety of a ruin in my deployment zone, not a particularly fitting role for the very angry marines but game-winning at least!

And what of the internet’s darlings, the Helldrakes, I hear you ask. Well, Graham countered them pretty effectively. His Vendetta took one out before it got a chance to do anything, the other managed to do some damage to his left flank but the Vendetta took it out as well 2 turns later. Fortunately he had to hover to get an angle on it which allowed my Soul Grinder to assault it and finish it off.

The Game ended 4-2 in my favour by virtue of the having the Relic and having killed his Warlord. In return Grazer had also killed my Warlord and took First Blood. It was a great game that had swung back and forth but once I’d got a couple of devastating units into his back lines the game definitely swung in my favour.
Just a few notes on what I learned about the list:

The two concepts of target saturation and speed worked and despite the disappointment of losing my Warlord and the Spawn before they saw any action, the units that did make it were sufficient enough to swing the game in my favour. The Maulerfiend was probably the unit of the game for me. It just wrecked Grazer’s fire-base and the Bloodthirster was a close second as he also put a severe dent into the artillery.

The Lord was the biggest disappointment for me but if he’d made it and the Maulerfiend or Bloodthirster hadn’t I think he would have been similarly effective. So it was just a matter of Grazer’s target priority dictating what I got to see in action this time. The Helldrakes were OK, but weren’t going to be stellar against a mech-heavy army, I did pick up some ideas on how to play them better though so that was a bit of a result.

Then we have the unsung work-horses in the form of the Bezerkers and the Fleshhounds. Both of whom did the job I expected of them, the ‘hounds drew fire away from the larger units in the first wave of the advance and lasted until they made contact with the Squat front lines. The Bezerkers escaped with the Relic which I needed after losing First Blood.

Unsurprisingly I really felt the lack of shooting in the list, I really wished I could have given the Soul Grinder an additional shooting attack and if the Maulerfiend could have just had a flamer or something that would have made a huger difference. However, for the most part, the list played like I thought it would and I definitely enjoyed it like I thought I would. I will have a think about getting some more shooting into the list but I’m not going to sacrifice the speed and target saturation concepts that the list was built on.
Posted by Unknown at 16:00