If it looks broke, maybe it 'aint. 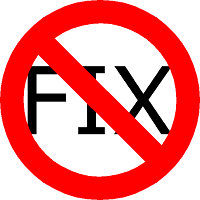 There’s a lot of moaning about underpowered codices at the moment and, to be honest, for as long as I can remember there always has been. A couple of blogs have been posting articles recently on fixing certain armies, but I’ve just got to pipe-up and say “Stop it!”.

You’re not a game designer despite what-ever delusions of grandeur you may be under and, even if you decide to post your own “improved codex”, no-one is going to use it. In fact, while giving everyone a level playing field may sound like a good idea, I don’t really think that it is.

I’m going to use my recent experience of Blood Bowl as an example here (and before you all mumble “here he goes again”, bear with me, this is going somewhere). In Blood Bowl there are clearly established tiers of teams; Wood Elves, Norse, Undead and Chaos are among the top tier, meaning that they are easier to play with and have reliable strategies for scoring points and winning games. There is a mid-tier consisting of teams like Khemri and Nurgle, these are teams who have defined strategies for winning but they are difficult to implement and tend to require much more careful play. Then there are the bottom tier teams such as Goblins, Halflings and Ogres who really only have one way to win games and are very difficult to play by all but the most experienced coaches. As this is a dice game, luck is also a factor and the tiers reflect how much the luck of the dice comes into play. With top tier teams being able to cope best with poor dice while the bottom tier teams are very reliant on good dice.

I expect that by now you can see where I’m going with this!

In 40K we seem to have a similar system of tiers in the various armies with Grey Knights, Space Wolves, Dark Eldar and Imperial Guard occupying the top slots and Nids, Vanilla Marines and Sisters pretty well entrenched on the bottom rung. Now I do appreciate the fact that the cost of entry to 40K is significantly steeper than that of Blood Bowl (probably in the region of 10x more). So if you happen to play Nids, for example, and GW updates your codex which drops you down a tier or two it’s not necessarily practical to go out any buy a new army. But this is a commodity hobby, you didn’t need those toys in the first place, suck it up and find a way to enjoy your chosen army. Or, go out and start to collect a new army, you managed to do it once, if you love it enough you’ll do it again!

Rather than railing against this “tier” arrangement why not embrace it? It’s very easy for a top level player to spray some marines grey/blue and go off to a tournament and do very well with them.

Instead, why not say, “Hey, I’m pretty good at this game, let’s try taking a more challenging army to the next tournament and see how I do!”? Being successful with a lower tier army has got to be more satisfying to the player and will surely garner more kudos from the community, if that’s what matters to you.

Given the level of competitiveness in the tournament scene at the moment I don’t really expect to see many people do this but I do not think that equalising all of the codices is the answer. Surely there are top players out there who want a challenge and I think the game would become rather stagnant and boring if everything became equal.

A couple of cases in point for your consideration, I believe that Nic Nanavati is having some success with Nids in the States and over here Gaz Jones has always been a proponent of Xenos codices which have not fared too well (power level-wise) under 5th edition. Also in the UK, James Ramsey was (when last I heard) defending the honour of the Sisters of Battle.

So, what do you all think? Does the variety in the power level of the codices need fixing or is it there to provide a variety of game-play experience? Or am I just talking bollocks because I’ve been playing too much Blood Bowl? I’ll turn it over to you.
Posted by Unknown at 19:40