Open War 18 - Flight of the Tyranids 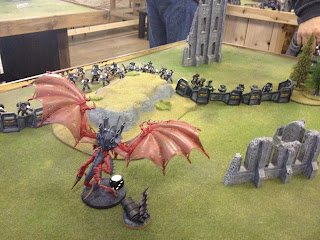 Last weekend was the 1st Company Veterans Club's twice annual tournament - Open War. It's held in Maelstrom Games in Mansfield and this is the 6th consecutive one I've attended, but my first with Tyranids.

I took the following:

The plan was simple, throw it at the enemy and see what happens!

The mission was Kill Points with Hammer and Anvil Deployment.

This was a list I’d heard a lot about but never faced and I felt it would be a tough match-up for me, his Wraith and Destroyer Lord unit would be difficult to keep away from and hard to deal with in assault. The sea of scarabs could potentially tie up a unit indefinitely which would severely hamper my killing power and he had more monstrous creatures than I did so in a straight-up fight I would be in trouble. All this coupled with the fact that this was only the second time I’d used the Tyranids in anger meant I was not entirely optimistic.

However, it started well with the Carnifexes significantly reducing his scarab population and the Tervigon on my right flank ploughing into his Ghost Ark and wrecking it, “1st Blood” to me! I’d also set up an assault where I could charge his Wraith unit with a pile of ‘gants and get my Trygon in on one side in an attempt to maximise his effectiveness and minimise his exposure to Wraiths and the Lord. I thought this looked a good option but it turns out I was wrong.

The Wraiths took everything I threw at them and pretty much laughed it off while dealing plenty of rending attacks back to my Trygon. Keeping endurance on him kept him in the fight longer than he deserved to be, sadly though while he was holding on the ‘gant screen was being comfortably eaten away and a unit of Spyders were now in range to charge the Trygon. So in a desperate attempt to turn the combat back in my favour I threw my Tyrant in there and challenged the Lord a flubbed Mind-Shackle roll later and I was down to 1 wound. This did not end well for me.

On the other flank the Carnifex and Prime unit had been charged by the scarab screen and while overwatch had thinned out their numbers again I was failing to roll 2+ to wound like it was going out of style. 6 rounds of combat later I was down to 1 Carnifex and on the last combat round of the game he failed to kill the last Scarab base needing only a 2+. That little event summed up the game for me.

I can’t put it all down to dice though, my opponent managed all of the above without his air support who stayed off the board until turn 4. His target priority and movement was excellent. He did exactly what he needed to to win the game 23-7

The Mission was Big Guns Never Tire with a Vanguard Deployment.

I don’t think there has been a tournament that both Keith and I have attended where we haven’t ended up playing each-other and after losing to his Daemon Hunters in our first meeting I don’t think I’ve lost to him since. With my experience of being on the wrong side of a fair number Space Marine vs Tyranid encounters in the past and with his pretty combat oriented list I have to say I was feeling confident about my chances here again.

I got first turn and decided to start with my Tyrant on the board, outflanking a brood of ‘gants to hopefully take one of the objectives close to the edge of the board. My Tyrant flew foward and attempted to take down the quad gun early but only managed to cause a single wound, the Tervigon on the right pooped out 7 ‘gants and doubled out with two 2s and a 3! The one on the left however was a baby machine and didn’t stop all game effectively securing the two objectives on that side by himself.

In the centre the Trygon made short work of the Dev squad manning the Quad Gun with an audacious 11” 2nd turn charge. Again I made the frankly stupid decision to land my Tyrant and charge him into the Initiate squad with the Marshall on the centre hill. This guy is not equipped for combat and he was eventually laid low by a well placed Melta bomb, by that time however the Trygon was engaged with the same unit and their fate was sealed.

Over on the right was where it could have gone wrong but the bunged up Tervigon and the Carnifex-Prime unit saved the day taking on the other initiate squad which had the Chaplain and the Emperor’s champion in it. The Prime and Champion killed each other in an epic challenge leaving the ‘fexes to finish off the unit , which was not an easy task with a single wounded Carnifex remaining standing after a couple of rounds of combat. The hero for Keith’s Army was the Dark Angels Chaplain who refused to die and hung in against an Iron Arm powered Tervigon until the game ended. The result was 25-5 in my favour but Keith definitely had dice that made my 1st game dice look poor so that was a bit of a flattering score-line!

The mission was Crusade with Dawn of War Deployment.

I’ll start by saying that I did not really enjoy this game despite the fact that my opponent was a nice enough guy to talk to, I just found his use of the rules exploitative when he was running a powerful enough list and was a good enough player not to really have to do what he did ... more on that later.

This game I rolled by far the worst lot of psychic powers of any game in the tournament – I don’t think effected the result but it did throw a spanner in the works and made my units feel a lot less powerful. I got first turn and decided to outflank the Tervigon who got Warp Speed (definitely not something I’m referring to in the previous sentence!) as I figured he could do a number on the inevitable back-line of vehicles. I started with the rest of my units on the board. Sensibly he only deployed long range shooty units which I did not have the firepower to deal with in turn 1 and possibly turn 2. So I walked into a gunline and my termagants were gone, typically the Tervigon on the board bunged up on turn 1 to the tune of about 9 ‘gants so I was not feeling confident about my chances of holding any objectives and I had conceded 1st Blood.

He got his non-preferred wave which saved me from the pain of the Screamers and Flamers arriving together but the Masque’s Pavane was allowing the Hellhounds to make short work of my units. Despite this I really had to just ignore her and get on with the task at hand, crossing the board! Thanks to the anti-aircraft fire on the board my Tyrant was a dead-man walking, he did manage to kill 3 of the 5 plague bearers before he bought it though ...

So I’d lost the left flank and the two objectives there so I focussed on the 3 objectives to the centre right of the board and here’s where I got a bit miffed. I was in range of charging his Bastion with my Carnifex unit (I bet some of you know what’s coming here) but my opponent pointed out to me the fact that the Bastion was technically unoccupied (his unit was on the battlements) and as it clearly says in the rulebook, I cannot target an unoccupied building. What made this worse was the fact that he’d positioned the Bastion so that the door was against his long table edge so I could not get into it to assault the unit on top. I didn’t argue this because the rule is clear and despite what I think I’m not the kind of guy to argue against Rules as Written on a point of fluff – that didn’t stop me for feeling pretty shitty about his use of what in any other game would probably be considered an “exploit” though.

It was really irrelevant though because the game was pretty much lost at this point. My bunged up Tervigon had experienced the exquisite pain of being charged by Screamers which was a total surprise to me having not seen them since the update. Needless to say my frustrated Carnifex unit rounded on them and vapourised them immediately after they’d finished with the Tervigon. Unfortunately for me he still had the flamers and they made quick work of the units I had left in the centre leaving me with a Trygon and the Tervigon who had outflanked, these guys were the heroes of my weekend!

The Trygon eventually succumbed to overwhelming focussed firepower but not before taking out a couple of units of guard and a vehicle. The Tervigon, however, would not die and would not stop pumping out ‘gants. He actually managed to spawn a big enough unit that I felt I could risk a charge with them against the remaining flamers. I gambled well and they made it in and were probably a only turn short of wiping the unit but sadly the game ended on turn 6 and I’d moved my Tyrgon off the Objective to be able to spawn the ‘gants within charge range of the Flamer, and forgotten to move him back. So I lost 25-5 to a far better opponent but despite the fact it really didn’t make a difference to the result I was just left with a bad feeling about the game because of the tactics with the Bastion, which is a shame because he seemed like a nice guy.

... although he was using those giant square “casino-style” dice which just don’t roll and I really don’t think are suitable for tabletop gaming use. But what do I care, I wasn’t there to win the thing just have a few games with a new army. I certainly got a lot out of it and I’m looking forward to putting the Tyranids back on the table-top very soon!
Posted by Unknown at 12:38