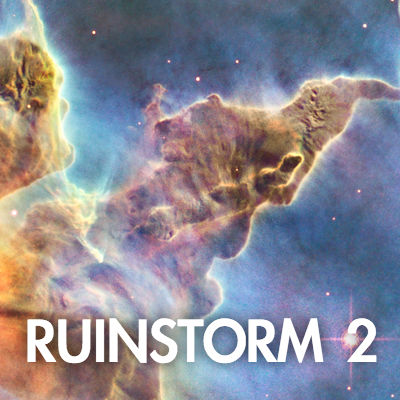 On Saturday I ventured forth to the Chaotic Wastes of Leicester to attend the one-day Ruinstorm 40k tournament. It was a 1650pt tournament using 'standard' 7th edition rulebook missions and, as a last-minute (well, with 7 days to go) addition, a simplified version of the Maelstrom missions as secondary objectives.

The reason I 'like' the list (as much as a fluff-player like me can like any filthy spam list) is that the army consists of six units to set up on turn 1, and is very quick and easy to run. I like 'compact' armies; having previously played Tyranids and Imperial Guard, I really appreciate an elite army which plays very quickly!

My round one opponent was Joe Isham, who was using an (almost) pure Deathwing army. It consisted of 4 x 5-man Terminator troops units, a Techmarine, Belial, a 5-man power-armoured Command Squad and an Inquisitor, all arriving in a drop-pod. Another very compact, quick-to-play army then!

Our primary mission was The Scouring, with simplified Maelstrom objectives as a secondary mission. Deployment was Hammer & Anvil. I won the roll and decided to go second (the standard option for Eldar armies with uber-fast scoring Jetbike Troops). Of course, Joe had nothing to set up except three Servo-Skulls, so I had free reign to set up my Wave Serpents and Wraithknight wherever I liked (inside my deployment area, that is). As the board was fairly lightly populated with terrain, this would give Joe ample space to deepstrike in his four Terminator squads and drop-pod. Therefore I split my forces fairly equally, and deployed on the extreme edges of my 'Hammer & Anvil' deployment zone (imagine where a left- and right-back in football operate!). The plan was to tempt Joe to land as far up the board toward my deployment zone as possible, inbetween the two flanks of my army, after which I would race away at maximum speed (scaredy-cat Eldar trick ahoy!) and ten snipe at his foot-slogging forces using my long range guns.

Well, the plan worked perfectly! Joe was very aggressive with his deployment, with all his units deploying either in my deployment zone, or just out of it. As I was going second, I moved 12" with all the Serpents to put some space between he and me, after which a couple when flat out (a further 18") to get them miles away from his Terminators. It would take him 2-3 turns of move/run to get anywhere near. The other Serpents and the Wraithknight then proceeded to unload all their guns into his troops, beginning with the nearest units, to make sure I could not get assaulted.

The game was not as one-sided as it sounds, as Joe did manage to kill the Wraithknight for first blood, and also managed to catch and kill one Serpent, but the bulk of my force had run away to the other end of the table where I stayed, shooting away at his infantry with their 36" Scatter Lasers and Bright Lances and their 60" Serpent Shields.

What really decided the game was focussing on the mission. The primary mission (The Scouring) was always going to be quite easy to achieve, as I could move wherever I liked with my Serpents to claim objectives, and then swoop down late-game with the Jetbikes to grab or contest any others. However, this is now only half the game! The Maelstrom missions also mean you have to score EVERY TURN! The stripped-down Maelstrom missions at this tournament boiled down to either killing a unit, or grabbing one of three numbered objectives. I found it took a lot of concentration to remember, turn by turn, what the mission was 'at that moment', however it was key to my success. By building up points reliably through the game as well as by grabbing 'primary' mission Scoring objectives on the last turn, meant things were always in my grasp.

My second opponent was the mysteriously-named Snooty Fox (aka Chris from Hull!), another very friendly and fun opponent (I was very lucky to play three great, friendly oppenents this weekend). Snooty was running... Eldar with Wave Serpents! That said, he only had three Serpents, which he complemented with a Wraithlord, a Fire Prism, a couple of decent-sized Jetbike squads and some Guardians.
Again, I won the roll for deployment, and let Snooty set up (and go) first. The deployment type was old 5th edition Table Quarters. He set up well protected by buildings, and so afforded himself very good cover saves for the battle to come. I then set up all five Serpents AND the Wraithknight in a very defensive 'blob' behind a large building in my zone. If Snooty had any large blasts, he would be hitting three or four Serpents with each shot, I was so closely packed!

In Snooty's first turn, he cautiously advanced his three Serpents and Wraithlord, and began shooting. Luckily I was obscured for the most part behind my building, and so was able to claim a cover save without needing to Jink. Snooty fired with all his guns... but didn't let off his Serpent Shields! This was pivotal, and he lamented the decision as soon as my first turn arrived, and I shot with EVERYTHING. I treat the Serpent Shields as guns - I don't even pretend that they have any sort of defensive properties. I took out two of Snooty's Serpents on the first turn, leaving him already under-gunned for the rest of the battle. For the remainder of the game, Snooty was always coming from behind, as my Serpent's alpha strike had pretty much crippled his forces. He did manage to kill a couple of my Serpents and take out the Wraithknight*, but I survived pretty much unscathed, whilst I had all-but-wiped his forces off the board.

And so we came to tot up points scored.

I had made sure to grab enough objectives to claim the 'Big Guns Never Tire' primary mission 5-4, thus giving me 4 tournament points (hereafter TP's). Snooty had shaded it on secondary 'Maelstrom' missions, earning him 3TP's. So, I had won! Except... I remembered that Snooty had killed my Wraithknight - a Heavy Support choice. This made it a draw on primaries (worth 0TP's) and so Snooty won by dint of secondary Maelstrom mission points! We had a good chuckle about the result, as the game was very one-sided in my favour, but the result proved otherwise!

My third and final game of the tournament was against Graeme Green, a Tau player and another very friendly opponent. Graeme was in fact my game 3 opponent of last year's Ruinstorm tournament, when his 6th edition Tau blitzed my Tyranids off the board, so it was great to have another bite at the cherry, and this time with an army of comparable power!

The deployment was Pitched Battle. Graeme set up first, and split his Tau forces into two roughly equal forces - to my left was a Riptide, a Skyray, some Fire Warriors and three Broadsides. To my right was a Riptide, a Hammerhead and some more Fire Warriors hiding in a ruin. I decided to 'refuse flank' and set up my entire army in my extreme right-hand corner, thereby staying out of range of his left-hand units. Once I had dealt with the right hand side, my plan was to swing around and 'roll up' his forces on the right hand side.

And so it proved. Graeme went first and opened fire with the forces to my right (directly opposite my forces), but my Serpents and Wraithknight were obscured behind ruins, so gained a cover save without the need to jink, and thus survived largely intact. His left hand forces began the long walk accross to try and get into range. During my first turn I returned fire against his right hand units, successfully destroying his Riptide and Hammerhead. The ability to pump out so many shots from each Wave Serpent, and the fact that the Serpent Shields ignore cover with D6+1 strength 7 shots, made short work of the Tau.

Turn 2 featured more of the same action - Graeme's Tau fired and managed to Stun a couple of Serpents, and then I returned fire and destroyed his other Riptide. After turn 2, the game was largely a forgone conclusion and by turn 5 Graeme was left with a few diminished Fire Warriors and a Broadside or two. We were both knackered, and Graeme had taken enough punishment, so we called it done. After totting up objectives and secondaries, I had won quite comfortably.

After playing in 40k tournaments for some 4-5 years now with 5th Edition Chaos Marines, 6th Edition Tyranids and 6th Edition Imperial Guard, I really enjoyed using a compact, elite army which was quick to play... and of course, quite devestating on the alpha-strike too! Being a fluff-bunny, I've never really used an uber-competitive list before, and so it was nice to go into a game believing I had a fair chance (all I really ask for!) against my opponents.

During the games themselves, I found it quite hard to keep track of which two Maelstrom missions I was supposed to be going for that turn, so I would strongly recommend to others that a pen and paper (or Maelstrom objective cards) is critical for keeping track; not only tracking which Maelstrom objectives YOU are going for, but also which ones your opponent is going for, and also how many points each player has garnered so far in the game.

On the subject of Maelstrom missions, I found it vitally important to be earning these during the game. With this paricular tournament's scoring method (see below), it was as viable to win by dint of secondary Maelstrom missions and tertiary points as it is to win the Primary Mission: