Battle of the Fang - the review 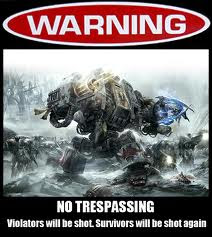 So today was Black Library live but unfortunately it fell on a day that Derby was at home so Big Gaz had to leave early. Because of that there was never going to be time to attend any seminars so it was purely a case to grab the books that we wanted and leave (as well as have a decent full English in Bugmans, best meal I've had in their for months remembering that I eat in there at least once a week).

This did however give me a chance to spend the day reading Battle of the Fang, you may remember that my review of Prospero Burns wasn't a happy one. I felt that too long was spent on none Astartes characters and their wasn't enough of the legendary characters that I wanted to be brought to life. I left that review with hopes that this book turned out to be better than that one. Well the grin on my face (even though you can't see it) and the speed that I read this book confirms that it was. It was excellent.

Forgive me if I put in any spoilers I will try my hardest not to.

Battle of the Fang is the next in the Space Marines Battles novels written by Chris Wraight
and I believe this is his first step into the world of 40K having previously written about The Empire in fantasy. (He was kind enough to do a Q&A on this book last year to the posters on Bolter and Chainsword which can be found here)

The book follows the story of the Wolves of Fenris in the 32nd millennium. Their Great Companies are scouring the galaxy for the arch-enemy headed by Magnus the Red. Unfortunately the need to remind the enemy of the burning of Propspero leaves the Fang tragically undermanned and the Sky Warriors are in for the fight of their lives to protect their home planet

So what did I like about this book?
Firstly unlike the previous Space Marines Battles books this looks at things from both the perspective of the enemy and the heroes. One of the things I most liked about A Thousand Sons and actually the best of the Horus Heresy books is that it leaves you unsure if the villains are evil? I will have to pass this book over to my dad and then get it back and read it a couple more times to understand the motives of Magnus thoroughly and that has to be a successful book. There are a number of different plots going on which also increases my likely hood to pick it up again and again, characters leaning towards a perceived heresy, those dealing with their own guilt and insecurities while others still trying to come to terms with living with demi gods and living legends. Unlike in Prospero Burns and the Ragnar series where we only got to see a number of Astartes in both this book had a more holistic approach to looking at my favourite legion.

Another reason why this book was so good was the speed that it moved at, within 88 pages the enemy was on Fenris leaving over 400 to tell the story. I read Black Library books for the action, this certainly delivered. We saw the action of a Rune Priest in full flow, the viciousness of a blood claw attack, the stoic fire support of the long fangs and the devastation that a few Venerable Dreadnoughts (including the eldest in the Galaxy) can bring about.

You also got some hints on things that have so far only ever been rumoured. We have known for a long time that the IX legion only ever had 1 offshoot chapter. Why? Well let me tell you that by the end of this you know and yet there are still more questions to be asked. And they also in a very tiny section that made the hairs stick up on the back of my neck hint to knowing something of the fate of Russ.

And finally the real reason that I loved this book was that it linked Abnett's view of Space Wolves with Kings depiction of action. The more time that has passed since reading Prospero Burns the more I feel that Abnett's moving forward with the ideas of the intrinsic views of the Space Wolves legion were needed its just that the story wasn't for me. Wraight combines Abnett's ideas that the Wolves aren't just killers for the sake of it with outstanding action from the word go and for me it made it much more palatable. The new terminology for the Wolves and their home is reinforced not just by the Space Wolf characters but by those of their mortal servants and troops and also the enemy. Following my poor review of Prospero Burns Aaron Dembski-Bowden was kind enough to address some of my points on it (here) and suggested that I might just prefer a less mature vision of the Space Wolves which I think was dead on, I don't look for great literature in a Black Library book just a fun read that I can pick up as I want. As I said, this book did both for me, it moved on from the drinking, farting and fighting view of William King (which I still love) into a showing that none Fenrisians don't understand the IX legion and can't without living and maybe more importantly fighting among them.

What didn't I like?
Well in honesty not a lot.
My main gripe and it is me being really really picky is that there were at least 5 different stories going on and it sometimes jumped a little too much.
There wasn't really a primary protagnoist.
We see a Rune Priest, a Wolf Priest, the Wolf Lord or Jarl in charge of the lone company in the Fang, a couple of blood claws, a Wolf Guard squad leader, a scout, the wolf lord and the list goes on, all in equal measure. Most excitedly we get a good amount of Bjorn but honestly this was me looking for a fault.

All in all I give this book a solid 9 out of 10. Its one I will certainly be picking up again and again in the future and I look to seeing more from Chris Wriaght. Certainly for me the definitive Space Wolf book and well worth the Black Library live ticket to read it early. I'm now going to move onto Victories of the Space Marines which contains another Space Wolf story.
Posted by Unknown at 17:52