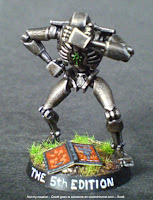 Well, it's time to start the review of my Blood Angels' performance at Open War 15. The event itself was as enjoyable as usual, a great atmosphere and superb opponents as always.

The tournamnet was held a Maelstrom Games in Mansfield for the first time, previously it has been held at Warhammer World. I'm not going to go into the reasons for the switch of venue but suffice to say that Maelstrom is a top quality establishment and everything was of an extremely high standard; from the scenery and tables to the food and hospitality of the staff.

My list was completed well in advance of the night before the tournamnet for a change so I could take it easy in the run up to the big day. This was rather fortunate as it turned out as I got hit by a virus and needed a good night's sleep, none-the-less I was still popping pain killers all Saturday!

Enough of all that, on with Game 1. My list can be found here.

Now you may hear it said that I hung out in the car park all morning and followed a guy from our club, who I know plays Necrons, into registration because I know how the pairings are worked out! I can assure you that this is not the case, Steve was the first guy I saw who I knew and we chatted from the car park to the registration table and it just so happened that we were paired against each other in game 1 ... honest!

Necrons should be a good match up for me but I've had mixed fortunes against them in the past, only beating them once in 3 previous matches. This time, however I as playing a fast, assault army and I knew all I had to do was shoot his assault units, ignore the Monolith and charge the rest.

Amazingly I managed to stick to the plan and I phased Steve out at the top of turn 5. Mephiston was a complete beast in this game (as he would turn out to be for the rest of the tournament), taking out 3 units all by himself and the war scythe Lord before he could swing back. I know I should not be surprised by this but I'm not a big Mephiston user and as such I was genuinely not expecting him to be so nasty.

On the flip-side the game further re-inforced my opinion that Assault Marines, even Blood Angels Assault Marines, are all-but completely rubbish. A unit of 10 necrons held up my 10-man jump-pack Assault Squad for 2 game turns (4 rounds of combat) with no problems. I just could not do enough wounds and even lost a round of combat. I think attaching an IC is mandatory if you want them to be effective in assault, either a Chaplain or Librarian. Re-rolling hits is going to make a big difference in their effectiveness in my opinion.

Anyway, it was a good win and it put me on top table for game 2, not ideal as I'm not up to playing at the level required to compete with the top tourney players. However it was Tim King from Team Scotland so I knew I'd at least be smiling as I was taken to bits!
Posted by Unknown at 16:00