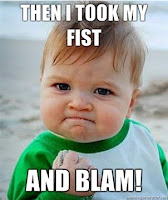 It's the morning of the tournament and hopefully I'm on my way up to Mansfield in Gav's car. I say hopefully because I played golf yesterday, which I thought had worn me out but given my condition as I write this (8pm on Friday night), I fear I may be coming down with a case of the flu or something similar! Still, that's why they make pain-killers. RRAAGGGHHH!

Assuming that all is well though, we've got 3 great games of 40k in front of us, and perhaps a little drinking as well. The army I'm taking is a Blood Angels and it's a list that I've been tweaking for a number of weeks. I've finally gotten it to a point where I'm happy with how it feels and how it performs in the Open War missions, which are non-standard missions and I have to say I prefer to play them over the book missions.

“What's in the list?” you may say … or more likely “Shut up and get on with it Andy!”. So without further ado, here's my gambit for a day of competitive gaming:

So lets talk about this a little. Firstly, Mephiston. To be honest I'd never played him competitively before I started to test this list and really I'm including him because this time Open War is allowing special characters and he's a little hammer unit all on his own, For the same points as a Land Raider he's just a lot more killy, and survivable. Fingers crossed he doesn't get too badly shut down my psykers though.

Troops next, scoring units are key to all of the missions at Open War so you want to take a fair number of units here to give you a good chance at winning on the mission objectives which range from table control to objective capture. The Jump Pack Assault Squad is my anti-infantry unit and will be supported by Mephiston should they come up against anything particularly nasty.

The Razorback squads are little more than moving cover with some utility and, of course, the ability to score. One Melta Gun and one Plasma Gun won't do a lot but at least they are not totally non-threatening to my opponent. Given how much I struggled against Daemons at the Calidonian Open I'm kind of going for volume of shots in many of my units while trying to keep some ability to deal with armour and heavy infantry.

Lastly I have a 10-man Tactical Squad in a Drop Pod. A 10-man Assault Squad in a pod may have been better but frankly I don't have the models so I'll make do. They bring a lot of Melta and could potentially alpha-strike but I mainly plan on dropping these guys second to secure table areas or objectives. They are my ace-in-the-hole to steal mission objectives, hopefully, later on in the game.

Elites are straight forward, the Sanguinary Priest goes with the Assault squad and should give his bubble to Meph as well. The Furioso is not guaranteed to use the Pod, Gav recommended that I walk it on as every time I drop it it just gets meltas redeployed within 6” of it and it exploded in a puff of some in turn 1 or 2. The plan if it's walking on will be to walk behind the razorbacks to support the weak units inside and make my opponent think twice before deciding on them as an easy option.

In the Fast Attack section I have 2 Flamestorm equipped Baals. They also have dozer blades because I want to be able to scout them without having to go around area terrain. Now yesterday I managed to roll double 1's and immobilise one of them but seriously, given the odds there's no way that can happen to me tomorrow … right? If I decide not to outflank them I think I'm goingt o want the jumpers and Meph on one flank, the Razorbacks and the Dread on the other and these guys straight up the centre. You know what they'll be doing, Long Fangs, Dev Squads, Jump Packers, relatively easy meat and will give my opponent some deployment concerns.

Finally we come to my favourite guys, the two Rifleman Dreads. Awesome Light Armour killers and Deamon Prince/Monstrous Creature killers extraordinare! I love these guys and they rarely let me down.

So that's it, what do you think? I guess the results will tell the tale so keep an eye on twitter for updates as they happen!
Posted by Unknown at 08:30