Some Good Men Go To War

Firstly, I'd like to join the crescendo of voices thanking Alex for organising last week's Blog Wars tournament. It was a brilliant day and I really wish I could have played (put it this way, if I'm still in the country for the next one, I'm definitely entering)

Anyway, without further ado, let's get onto the pictures. I didn't catch everyone's names so apologies for that...


Wazdakka prepares to lead his biker Boyz against Graham's Orks: 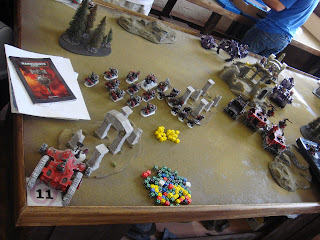 "Erm, of course my Mephiston knows Null Zone" - Andy prepares to face off against Bully's Deathwing: 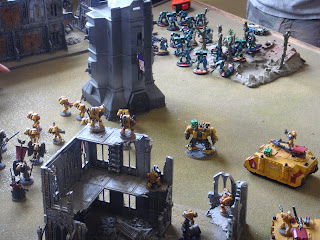 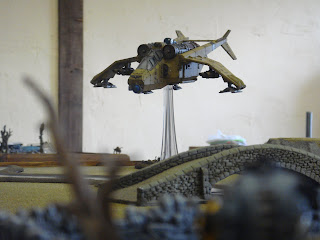 Ragnar risks becoming a squig as Alex faces off against Darren and Old Zogwort: 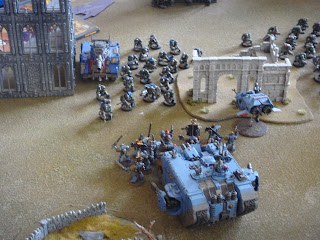 "I think I left the oven on" - Mephiston decides he has somewhere better to be: 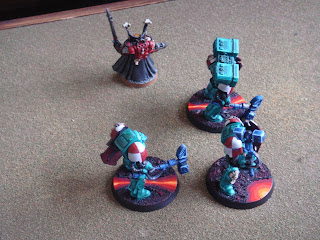 Learning his lesson from the first game, Mephiston hides: 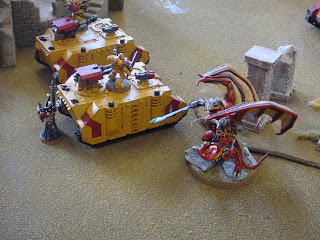 Graham's Defiler also hides but he can still see those nasty Grey Knights: 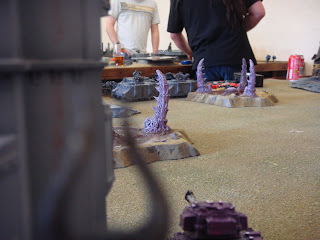 It's Annihilation and Mick faces an army with only 3 Kill Points make up of 2 wound Terminators: 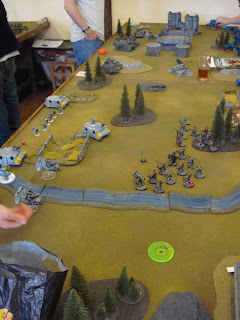 Darren's Orks take on Blood Angels - and these Angels can fly: 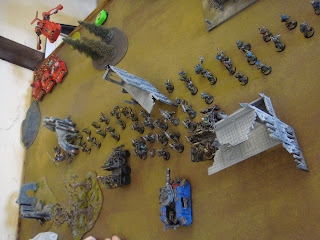 Bjorn gets stuck in: 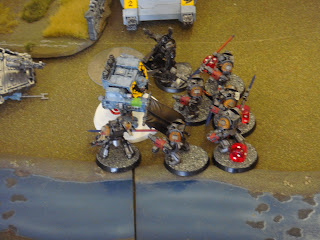 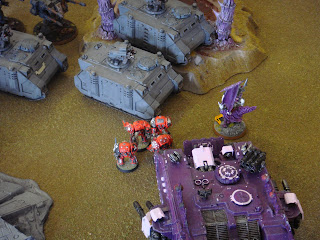 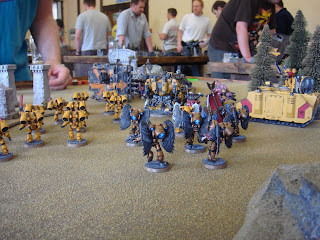 An Ork and Blood Angel bloodbath: 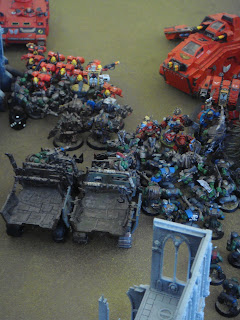 Arena Of Death on tour. Matt's Draigo takes on Calgar: 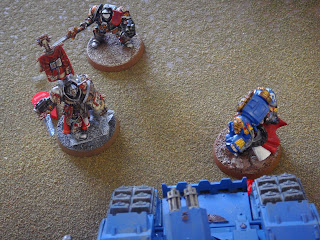 Andy's Blood Angels prepare to be assaulted by Darren's Deffkopta: 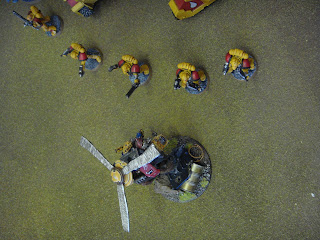 Mick takes the fight to the fishmen: 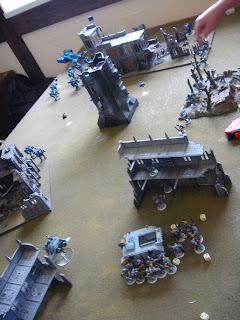 A Grey Hunter's eye view of those Crisis Suits: 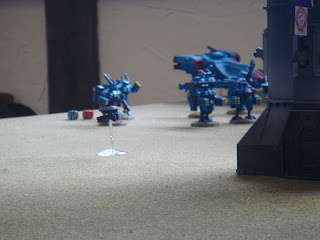 In the perfect end to Graham's weekend, Kharn gets killed by Rough Riders: 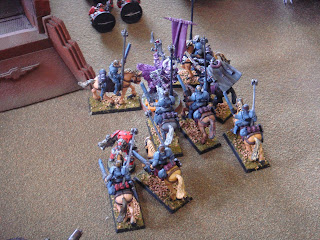 The final Claws and Fists tally:

A few thoughts on the performance of the C&F guys...

Mick really needed to be more aggresive in game 1 against the IG. He was unlucky to imobilse a Rhino early on but there should have been two Rhinos trying to grab his opponents Objective. Then, he left the squad inside the Rhino and only tried to contest with his two Speeders which were easily shot down. Game 2 was a tough match up - a Kill Point game against an army with only 3 Kill Points. He was unlucky though, as Bjorn was half and inch short of a potential game winning charge and then the game ended on turn 5. Having said that, Mick finished the game with a lot of his army still in one piece, again evidence of a lack of aggression especially against an opponent he had to table to win. Game 3 was nip & tuck but it would have been really harsh if Mick had finished the tournament without a win.

I'm not really sure what to say about Andy's game 1. He got tabled by a Deathwing list and there's no advice I can give since I came very close to being tabled by a similar list at the last Open War (all I had left of 1750 points was an imobilised Rhino) Similarly, I can't offer any critique for game 2 as he tabled his opponent. Game 3 was against a very canny operator but Andy failed to leverage his speed advantage late on. As Andy started what would be his last turn, he was 4-1 down. A Boyz squad held one Objective, 2 Mega-Nobz another and a squad of Grotz was stretched across 2 more. Andy's Sanguinary Guard dealt with the Nobz but a failed Tank Shock left the Boyz in place. What he should have done is driven his Razorback 18", jumped out and shot at the Grotz. Yes, it would have been a long shot to kill enough to force a Leadership test and then for them to fail twice  but it was probably better than trying to Tank Shock through a Power Klaw armed Warboss.

Firstly some Robin Smith-esque man-love. The way Darren uses his "throwaway" units (Storm Boyz and Kommandos) to tie up and distract enemy scoring units is a joy to watch. Game 1, he needed a bit of luck to defeat Alex but having weathered a Ragnar Blackmane charge, it would be churlish to begrudge such luck. Game 2, he was almost too Orky. Playing against an army with very little long range shooting, he let himself get sucked in. Some might argue that if the Kommandos had turned up on the correct flank things would have been different but that's the risk you take with outflanking. Game 3 against another Blood Angel player could have been closer but his Warboss stopped a final turn attempted Tank Shock.

For some, this tournament can be summed up with how their special characters did. For Mick, Bjorn kicked arse and took names in the game he won and was 125mm away from winning game 2. For Andy, Mephiston ran away in game 1 but did much better in game 2. Now I was (un)fortunate enough to witness then demise of Kharn in games 1 & 3 for Graham. Game 1 heU was run over by an Ork Deffrolla and game 3 he was killed by some Rough Riders! Game 1, Graham suffered a similar fate to Mick in that he got nowhere near his opponent's Objective but, he was unlucky not to hold his own as bloody battle erupted all around it. Game 2 was always going to be a tough match-up against an army that was shootier, more mobile and more resilient. The game was close for the first three turns but then the Grey Knights accelerated away. Razorbacks full of small squads normally equals Kill Points a-plenty but Graham really lacked the long range fire power to take advantage. Game 3 and Kharn's Land Raider got punked early and Graham struggled to get anywhere near the IG gunline. This was one of those games where you really need to think about how to cross the board and it would possibly have been advantageous to Deep Strike the Obliterators and/or the Terminators.

I calls it as I sees it. Did you play against any of the C&F guys? What did they do well and what should they have done differently? If you did play against them, why haven't they added you to our blog roll?
Posted by Claws and Fists at 15:00