This weekend Warhammer World was running an Age of the Emperor (AotE) campaign weekend so when I tried to book a table I got a stifled chuckle and an apology. So Gav and I decided to try our luck as I was told two tables had been kept free but were not able to be reserved. Sadly upon our arrival we were told that the two free tables had been reserved earlier in the morning (insert "stifled-expletive-hidden behind understanding-smile" here). Fortunately Gav had suggested I bring along Space Hulk in case we couldn't get a 40k table; so we got a beer table instead, outside Bugmans and set up a mission, with some drinks, in the bright summer sunshine (honestly, sun, in the midlands, in May! I was surprised too).

The mission we went for was Mission 3 - Rescue (the table was not big enough for the board required for Mission 2 - Cleanse), this is the one where you have two teams of Marines at either end of the board and you have to escort the C.A.T from one entry point to the other. I was a bit dubious about the mission as I thought it strongly favoured the Genestealers but it turned out to be a lot of fun (mostly for me though!).

I took the 'stealers' first and decided that I was going to go for the middle of the board before Gav could control either of the major corridors which allowed my blips to enter and contest the centre quickly. I also misunderstood the rule about blips having to lurk if a marine is within 6 spaces of their entry point, I didn't realise they only had to lurk 1 turn and could come on after that! Because of this I didn't bother trying to bring blips on from the entry points closest to his starting areas. As it turned out this probably worked in my favour.

I manged to get a large number of blips into the centre of the board and quickly and whittled down his unit carrying the C.A.T., crucially taking out his marine with the Heavy Flamer in the process. In the other half of the board I was throwing 'stealers into the firey maw of his Assault Cannon. I was purely trying to get him to expend his ammo so I could make a serious attempt at wiping out this squad before the loose C.A.T. made it's way to that team.

In the end I managed to wipe him out, at great cost to the hive mind, but hey I guess they'll get melted down and used for new bio-organisms anyway, no great loss there then. So that was 1-0 to the 'stealers and, after a refill, we swapped sides.

Having seen the game play out I had a clear idea of the tactic I wanted to employ, I was going to keep my teams together and get to the central corridors with 'stealer spawn points as quickly as possible. My Assault Cannon would basically hold the fort against anything coming in from the left edge of the board while my team with the C.A.T. would move as quickly as possible towards them because if the Assault Cannon ran out of ammo before they got past his position I would be screwed!

The plan went well and was helped by Gav placing his first bips behind where I was going. It did mean I had to set a rear guard for each team, but I was going to do that anyway. My plan went as intended and I was able to get the C.A.T. across the board with the loss of only 5 marines. I have to say I was really helped a lot by Gav's bad luck with his blips, if he'd had a few more 3's rather then the 1's and 2's that kept showing up I would have had a much harder time but as it was, my rear guard held firm with the Heavy Flamer shutting off routes as we advanced. The Assault Cannon did it's job well too, keeping the corridors clear until Squad Lorenzo got past, but again bigger blip counts would have caused me more problems with the Assault Cannon's limited ammo supply. Anyway, 'twas a good fun game and made up for the thrashing I received on the 40k tables the other week! 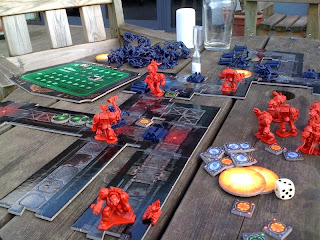 After the game we went for a wander around the tables to have a look at the armies people had bought to the AotE campaign weekend and I have to say I'm always blown away by the quality of the modeling and the painting players bring for these types of events. Armies that stick in my head include a great number of White Scars lists, a beautiful box full of Word Bearers, some brilliantly painted (yellow) Imperial Fists and some stunning looking Thunderwolf Cavalry conversions, pictures below: 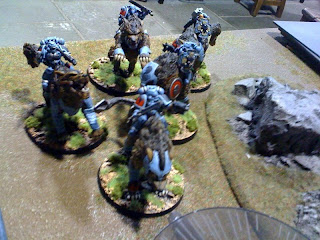 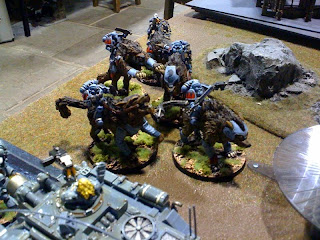