Even from so far away Svengril could still hear his Psyber-Raven as it added its voice to the dawn chorus of the birds native to the planet. It served as a beacon drawing the Space Wolves towards their objectives. As Svengril looked through his Raven's eyes he allowed himself the merest of smiles, there were no enemy troops in sight. "Excellent", he thought, "we'll have the objectives secured before sun up".

We were playing at 1750 points between my Space Wolves and Andy's Space Marines, we rolled up a Capture and Control mission with Dawn of War deployment. I won the roll off and decided to go first.

Svengril still hadn't heard from the Wolf Scouts he had sent to operate behind enemy lines so he sent forward two Rhinos to scout the area before the rest of the force arrived. In the distance one of the drivers thought he could make out an enemy Rhino but it was too dark to be certain. 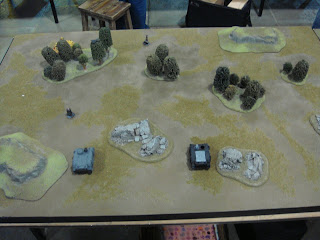 The Space Wolf army charged onto the field, led by Svengril Icefang who jumped into his rhino with his Grey Hunter pack and sped across the battlefield. Behind him the res of the Space Wolf army moved into position. On the left hand flank the Land Speeders moved flat out in order to get to the enemy quicker while the two Rhinos fired their Smoke Launchers.

On the opposite side of the battlefield the enemy moved into position. The Thunderfire Cannon drove to the top of the far hill from where it could see most of the field, flanked by two Land Speeder Typhoons. Everything that could open fire did so at the two Rhinos but a combination of darkness and cover from from smoke meant that the only thing that happened was one of the Rhinos became immobilised. Meanwhile an empty Drop Pod crashed down in the middle of the Space Wolf lines. Svengril looked at it with barely disguised hatred; if they couldn't destroy that thing it would completely block off the Long Fang pack on the hill and ruin all of his plans. 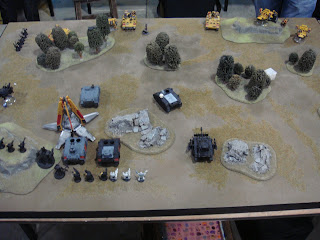 Svengril mentally contacted his apprentice in the second Rhino - between them they were to target the Rhino containing the enemies leader and one of the Land Speeder Typhoons. The Hatches opened on the Rhinos and Lightning flew from the fingers of the two Rune Priests. the Land Speeder was immobilised and had its Missile Launchers blown off while the Rhino was also immobilised. On the left flank the Wolf Scouts arrived and wrecked the other Rhino forcing the Tactical Squad to disembark. In the centre the Predator open fire at the Razorback, wrecking it. At the rear of the Space Wolf army, everything that could opened fire on the Drop Pod causing it to explode.

The Tactical squad decided to take revenge on the Wold Scouts who had destroyed their Rhino by rapid firing their Bolters at them. Five of them died but clearly Russ smiled down on the one armed with a Meltagun as he survived. Determined to avenge the death of his brothers, he stood firm and prepared his Meltagun to fire. The Land Speeder and the Dreadnought opened fire again on the two Space Wolf Rhinos wrecking one and ripping the Storm Bolter off the other one. Meanwhile the driver of the immobilised Rhino managed to get it moving by jerryrigging the engine. At the rear of the Space Marine army the Thunderfire Cannon opened fire at the Long Fangs on the hill and managed to kill three of them. 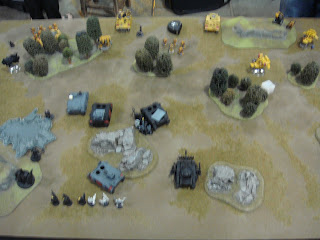 Svengril was not happy. His Rhino had been wrecked and he was determined to claim vengence on the man whose fault it was that he would now have to walk back to base camp. He stetched out his fingers and more lightning hurtled towards the Thunderfire cannon but was unable to do any damage. The Wolf Scout opened fire on the Tactical Squad that had killed the rest of his pack and along with the two Land Speeders behind him managed to cause enough casualties for them to decide to make a tactical withdrawal. The Heavy Bolter Razorback sped forward before skidding 180 degree and discharging the Grey Hunters within. they fired their Meltagun at the Dreadnought immobilising it before they charged the creature. They managed to blow one of its arms off with a Krak Grenade but couldn't really do any real damage. The long range elements of the Space Wolf army all opened fire but only managed to kill a couple of Tactical Marines.

The skies opened and the Drop Pod came crashing to earth. The two squads disembarked in good order and managed to wreck the remaining Rhino with Combi-Meltas. The second combat squad all fire at one of the Land Speeders but only manage to prevent it from shooting. Meanwhile the Thunderfire Cannon fired four shots at Svengril but failed to wound the old Rune Priest. The remains of the final Tactical Squad charge the Grey Hunters locked in combat with the Dreadnought. They manage to kill one but the Dreadnought can do no further damage so the battle continues. 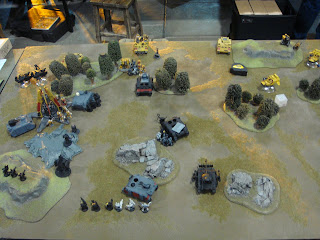 Almost everything opened fire into the two squads that had got out of the Drop Pod. The only exceptions being the Predator that managed to shoot down a Land Speeder Typhoon and Svengril who managed to destroy the Thunderfire Cannon and also kill the Techmarine operating it. Svengril turned around in time to see the enemy champion and his squad start running from all the fire they had taken. The Lone Wolf and Thorghir the Dreadnought charged the remains of the second combat squad and wipe them out. The Grey Hunters locked in combat with the Dreadnought lost another couple of members but held firm

With everything either retreating, unable to move or locked in combat, there was much for the Space Marines to do. The last of the Grey Hunters in combat with the Dreadnought was finally cut down and the remains of the Tactical Squad consolidated back towards their objective. At the rear of the Space Marine line, their great champion took his Thunder Hammer and Storm shield and, accompanied by two Sternguard veterans, left the field of battle.

Long range fire power managed to wreck the final Space marine Rhino and the squad inside were cut down by the Land Speeder's Multimelta and Heavy Flamer. The Dreadnought was brought down with a combination of Plasma Gun fire and Living Lightning while Heavy Bolter shells reduced the last Tactical Squad to one Marine.

The Space Marines prepared their last roll of the dice. Calling down an Orbital Bombardment on the Space Wolves objective the enemy commander managed to kill 4 Grey Hunters and immobilise a Razorback. The remaining Grey Hunter, fearful of a second wave moved himself out of the way. No one was in range of the Space Wolf objective and the Space Marine one was only being contested, Svengril knew he needed the battle to continue if he was to emerge victorious. 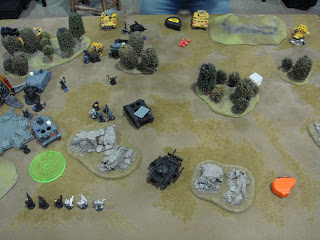 As one Land Speeder killed the last member of the Tactical Squad, the second killed the enemy leader. The Lone Wolf charged the Drop Pod and managed to wreck it with his Thunder Hammer. Svengril surveyed the scene; all that remained of the enemy force was an immobilised Land Speeder. the day belonged to the Wolves of Fenris. 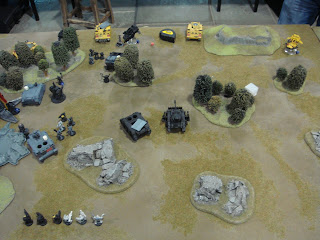