After a draw and a minor loss I was safe in the knowledge I could no longer duplicate the result of the last Open War and finish dead last! I also figured I was probably in a good position to get a win out of this game as the field should have shaken itself out and I would hopefully be against at least a comparable list/player.

The mission for the last game was one created by the Open War team called Dawn Raid, details as follows:

Deployment: Pitched Battle
4 Objectives, Night Fight rules apply in turn 1
Each player deploys an objective on the edge of their deployment zone and another not in either deployment zone and no closer than 12" to another marker
You get one point for each kill point and 2 points for each objective you control at the end of the game. You also score 1 point for any objectives you contest with a troop choice.

My opponent was a fellow Space Marine player and his list was:

Three Vindicators was going to be interesting, that's a lot of firepower! Also the mission was new to me, I hadn't had time to play-test it and to e honest I really hadn't thought about a strategy. All in all, apart from the Vindis I wasn't too worried about the list, only a small Sternguard Squad, Assault Marines and 3 Tactical Squads, nothing too killy as long as I can neutralise the Vindis!

Objectives were placed first and I placed both of mine fairly centrally on the table, he placed one on the edge of his deployment zone on my left flank and his other fairly centrally.

I got the first turn again and deployed in the bulk of my army fairly tightly in the centre of my deployment zone to enable me to be able to get to three objectives relatively easily. Terrain protected my flanks and I has a couple of good firing lanes for my heavy weapon units. I deployed the speeders on my extreme right flank hoping I would be able to maneuver them to get side armour on at least one of the Vindicators as early as possible.

He deployed very tightly castled on my extreme left flank with his three Vindicators on the left board edge. The majority of his army was in good cover behind a ruin but his Vindicators would not be in range to fire on any of my army for at least 2 turns which made me a happy bunny :)

On the first turn my speeders turbo-boosted along the back of his lines to get back into the fight, I also dropped the empty pod in cover on the far right of the board to keep it from becoming an easy kill point. In the shooting phase I was able to light up two of his Rhinos with spotlight hits from the Razorback and Rifleman Dreadnought and that was the end of them.

He started off by advancing his Vindicators down the left flank and popping smoke. The Sternguard unit dropped into my back lines and popped Pedro's Rhino. So far so good, minimal impact from one of his more killy units and they were going to be ripe for the picking next turn. 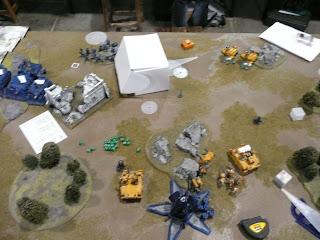 Turn two started well with my reserve rolls bringing Lysander and his Sternies to the party, I dropped him in behind the Vindicators and next to the Assault Squad's Rhino. The speeders moved into range of the Assault Sqaud Rhino and the Tac Squads in his back lines. In the shooting phase Pedro's unit finished off the Sternies in my back-lines. The Dread and TFC tried to whittle down his tac squads in cover but he made a lot of saving throws so I didn't get a lot of joy there. However the combined result of my Landspeeders and the combat Squaded Sternguard resulted in 1 wrecked and 1 destroyed Vindicator and a destroyed Rhino ... nice!

My opponent got his Tac Squad in their drop pod and they came in next to my speeders, not a comfortable position for my skimmers. His remaining Vindicator rounded the corner and drew a bead on on my Tactical Squad in the Rhino holding my home objective. Kaboom! The Rhino went up in a cloud of smoke leaving my Tac Squad in a smoking crater - this lead to the first rules check of any tournament I have ever played as he wasn't aware that I could claim cover from an exploded vehicle. When staring down the barrel of a Vindicator I am going to do everything possible to get myself a save of some kind! His Tac Squad combat squadded out of their drop pod and took some shots at my speeders, probably doing some damage but not destroying them, I would have remembered that! Finally his Assaut Squad and the captain multi assaulted my sternies and Lysander resulting in a tied combat. The Captain directed his attacks at Lysander who was too busy pulverising the assault squad to notice the Lightning Claws trying to get his attention and took a wound! How rude. 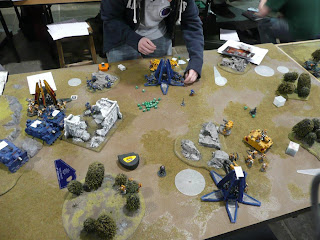 This is where the game starts to get a bit messy in my memory, there are a couple of key areas where the game is won, the first being the battle between Lysander, the Sternguard and the Captain and the Assault Squad. This combat eventually whittled down to Lysander vs the Captain and the Sergeant of the Assault Squad. I declared that I was going to split my attacks, 1 on the Sgt and 2 on the Captain, and my opponent challenged this saying I couldn't split my attacks like that. As this would be a somewhat crucial combat I suggested getting a ruling from the judges. The result was that we decided to roll for it and it came out that I was allowed split my attacks. I'm pretty sure this is absolutely fine but I was surprised that the judges would not rule one way or another on it, please post comments below. Anyway, surprise surprise Lysander marmalised them both and consolidated within easy reach of the two remaining members of a tactical squad that had been subjected to 3 turns of very accurate Thunderfire Cannon abuse. Needless to say that Lysander ended up single handedly shooing away any scoring troops from my opponent's home objective.

Key area number two was my tactical squad in the crater vs. the last Vindicator. The Vindicator managed to get 3 turns of shooting off against my Tactical squad once it had been removed from its transport and my genius play of claiming cover from the Rhino's wreckage would prove pretty unnecessary. The first round o shooting was devastating with me failing all my cover saves reducing the squad to three men ad to their credit they did not run. In the remaining two turns of shooting however, my opponent repaid my appalling cover save dice by rolling 1s to wound every single time. It was freaky! So the remnants of my Tac Squad doggedly held the objective to the end.

Finally the drop podded Tactical Squad, despite a torrent of bolter fire they took two turns to destroy my speeders but in the three turns that they were exposed to the combined fire of my TFC, Rifleman Dread and Sternguard Lascannon Squad I managed to completely wipe them out.

The result of all this was that I held two objectives at the end of the game to his zero, I also was well ahead on kill points and I won by a sufficient margin to score a massacre and bump myself up to 19th overall which I was very pleased about indeed. I think my opponent made some pretty big mistakes and I was happy that I managed to capitalise on them for a change. Despite the rules queries the game was played in a good spirit and my opponent managed to keep a positive attitude even though he was also royally screwed by his dice as well.