"M'aidez! M'aidez! We're going down! We were ambushed by a Tyranid fleet and now we are about to crash land. Please send a rescue force, it is imperative that the five samples we have aboard are studied so that we can find a way to beat them. I am sending the approximate co-ordinates of our crash site although I expect the ship to break up over a wider area. Tell my wife I love her very much and may the Emperor have mercy on our souls"

- Last transmission from Captain Dallas of the SS Nostromo, Ordo Xenos research ship before it crashed into planet designated LV429.

This is a 1500 point battle report between Andy's Tyranids controlled by me and Dave's Space Marines, which featured a Captain with Relic Blade, 2 Tactical Squads, a Sniper Scout squad, a TH/SS Terminator unit, a Venerable Dreadnought with Plasma Cannon, a regular Dreadnought with Assault Cannon and 3(!) Vindicators. We were playing Capture & Control with 5 objective and Dawn of War deployment. I won the roll of and chose to go first. 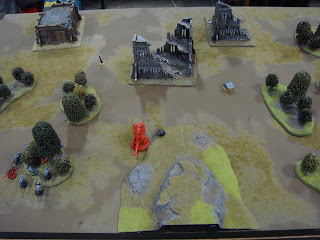 I started a Tervigon and a unit of Termagants on the board with the second unit in Reserve. The two Trygons would deep strike and everything else would come on Turn 1. Dave decided his whole army would come on Turn 1 apart from his scouts who hid on an objective in the top right of the board. 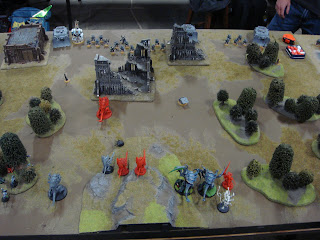 Under the cover of darkness, the Tyranid horde charged forward, the lead Tervigon making for the ruins in the centre while the Tyranid Prime and the two Carnifexes advanced on the 'nid right flank supported by the Venomthrope. With nothing to shoot at, the horde took their opportunity to run forward.

The Space Marines approached more cautiously, trying to set up some good fire lanes. The Venerable Dreadnought and the Vindicator on the right of the Space Marine line tried to fire at the 'nids but couldn't quite make them out in the gloom. 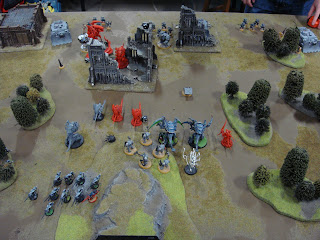 The ground in front of the Space Marine army bagan to shake and then, suddenly, a Trygon hauled itself out of the ground. Behind it the rest of the Tyranid army continued to surge forward as the second squad of Termagants entered the field of battle.

In reply a squad of Terminators appeared in a blinding flash of light at the rear of the Tyranid force. The Vindicators were either out of range or off target while three combat squads and two Dreadnoughts opened fire on the Trygon. One wounds were caused by a Plasma Cannon as the Venerable Dreadnought, Captain and 5 Tactical Marines charged into the creature. The battle was bloody with wounds being done to the Trygon and four Tactical Marines being killed but the fight ended as a stalemate. 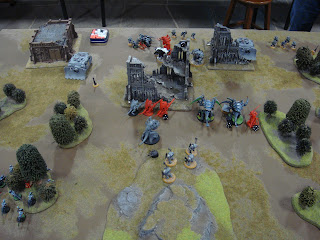 Both Tervigons relaised the need for more Tyranid troops and so spawned some Termagants. The one in the north created 10 but would be unable to produce any more while the other created 8. In the centre the Hive Guard moved forward and open fire at the unengaed Dreadnought preventing it from moving or shooting. The 10 new 'gants in the Marine deployment zone opened fire at the nearby Tactical Squad and then charged in. The other 8 'gants joined their firepower to the other 10 as they all fired into the Terminator squad. A single Marine was felled and so the 18 creatures charged into combat. The lead Tervigon meanwhile charged into the Plasma Cannon wielding Tactical squad. The close quarter fighting was brutal as the Dreadnought and the Captain managed to down the Trygon. In its death throes it tried to kill the Space Marine Captain but could only cause two wounds thanks to his Iron Halo. The 'gants in with the Tactical Marines caused a couple of wounds but lost a couple of their number to leave a standstill. The Tervigon killed two Space Marines for no damage and the remainder of the squad failed their Leadership check and fled. Meanwhile the other Termagants couldn't do any damage to the Terminators, while they merrily crushed 'nids with their Thunder Hammers. Only five 'gants remained at the end of the combat, kept there purely due to being Fearless.

The Marine Captain took a moment to wipe the ichor from his armour from the Trygon before charging into the Tervigon. The Venerable Dread wounded it with his Plasma Cannon before doing the same.Both Vindicators on the Space Marine left flank fired at the Carnifex unit, one hit, causing a wound on the Prime while one overshot, killing the Venomthrope. A Plasma Cannon blast wounded a carnifex as well. On the other flank, the Vindicator fired at the Hive Guard but only caused one wound thanks to them being in cover. In combat the Terminators made light work of their foes while the Tervigon killed the Sergeant of the Tactical Squad but was wounded by the Dreadnought. The other combat remained at a stalemate. 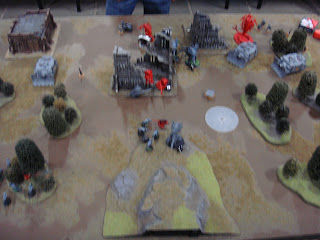 At the rear of the Marine line, the second Trygon emerged from its hole, ready to bring death to the Emperor's finest. The unengaged Tervigon spawned 5 more 'gants but would be spawning no more during this battle. The Hive Guard moved deeper into cover and then turned around to shoot at the Terminators. The new 'gants did likewise before the Tervigon, the Termagants and the Tyranid Prime all charged into the elite Marines. The Prime killed two with his Bone Sword while the 'gants managed to drag down another. The remaining Marine manged to kill the Prime but he realised it was only a matter of time before he was brought down too. The Tervigon managed to kill the Space Marine Captain but was consistently being wounded by the Dreadnought. Slowly, the Marines were gaining the upper hand in the other combat but the 'gants refused to run because their brood mother was so close. Meanwhile the Canifexes had finally found a target and charged into the other Dreadnought. The Dread caused a wound but the 'fexes struck back penetrating 9 times and causing an explosion.

The Marines opened fire at the Trygon that had recently appeared and manged to wound it with Plasma. The Vindicators fired on the 'fexes causing another wound. The other Vindicator opened fire on the 'gants that had spent all game camped on an objective but the shot deviated and only killed a single creature. The Venerable Dreadnought failed to finish off the Tervigon but wasn't hurt in reply. Similarly, the Tactical Squad still couldn't quite bring down the last of the 'gants. Meanwhile the final Terminator met his doom with the Emperor's name upon his lips. 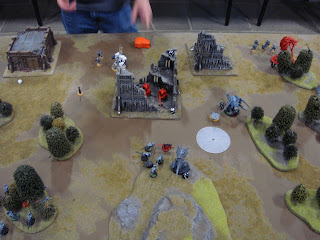 Scenting blood, the 'fexes charged into the nearest Vindicator and ripped it apart. The Trygon charged into the scouts who were on an Objective. He ripped them all apart for the loss of a single wound. The Hive Guard blew up another Vindicator leaving only one remaining.

Said remaining Vindicator fired again at the 'fexes as it backed away from them, causing a wound, which killed one of them and forced the other to flee. More Plasma caused a wound on the Trygon but the Tactical Marines were aware of what was about to happen. The Venerable Dreadnought finally finished off the Tervigon and the Tactical Squad killed the last of the 'gants even though there were now only two Marines remaining. 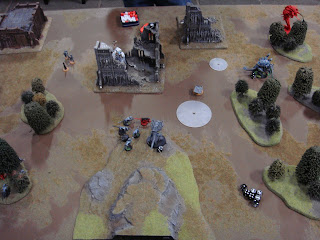 The Hive Guard tried to kill the remaining two Tactical Marines but couldn't harm them despite scoring 4 wounds. The Tervigon cast Dominion in order to get the Carnifex back in the fight, while the Trygon charged and wiped out the Tactical Squad.

The Venerable Dreadnought charged into the Hive Guard, while the remaining tow Marines made their way towards an Objective. The Vindicator backed off again and fired at the Carnifex but it was running out of room and out of time. 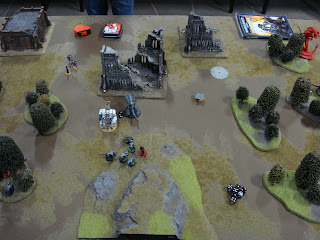 The 'fex ripped apart another Vindicator while the Dreadnought finished off the Hive Guard and made a desperate run to the Objective finishing just short.