So yesterday was Open War 16 and Andy and I headed over to Maelstrom to play in it (Darren came as well but as he's being a whiny bitch and is 'off' 40k he played Blood bowl for a few hours). 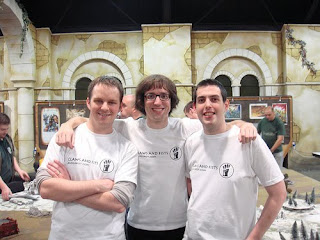 Open War was the first tournament I attended nearly a year ago (see out picture with a fresh faced me and Andy still having his overly youthful looks, Gav hasn't changed, he still looks like Jesus) and back then I was disappointed with my result mainly because I didn't pay enough attention to the missions and it let me down. This would be a good base to decide how I had improved after a year of Tournament playing.

My list has been shared on here many times so no need to do it again so on to the day.

Open War uses three made for purpose missions which I am told are based around some previous addition missions.

First game saw me come up against Ian and his Vanilla Space Marines (just a reminder in the Autumn open war no Special Characters are allowed) He had a librarian as his HQ, a big scout and a big tactical squad which he combat squaded, 2 speeders a vindicator and a dakka predator and then in drop pods he had a dreadnought, a large stern guard squad and then deep striking a terminator squad.

The mission was a diagonal deployment (if you want to see the missions check them out on the first company vets website, just google it and click on open war 16 and the rules pack) with three objectives in no mans land.

Ian won the roll off, the new dice I got from Vegas in the summer did me no favours all day and he set his units up in such a way to quickly take advantage of first turn. This however was a mistake and I stole the initiative. 15 missile shots later, 1 speeder was destroyed, 1 speeder had no weapons and was immobilised his razorback was similarly dispatched of its weapons and immobilised and one of his tactical squads had taken two wounds and legged it straight off the board.

He fired back with his stern guard landing just in front of my long fangs and the avenger being shot at them killing 4, the vindicator fired on another squad of Long fangs had a direct hit but my long fangs made a sensible tactical decision of getting behind some cover and only one died.

My shooting destroyed his vindicator with a side shot from my rifleman dread and one of my long fang squads put some inconsequential shots into the predator.

Next I made my biggest mistake of the game, the Stern guard had combat squadded on deployment and I had both squads of 5 surrounded by a squad of grey hunters accompanied by wolf guard and rune priest, the first squad I decided that 5 sternguard and a librarian would be dealt with by 5 missile launchers and a rapid firing squad with 2 meltas and living lightning, unfortunately life didn't work like this and 3 survived including the Librarian and I was left with an avenger toting librarian looking nastily at my bunched up Grey Hunters.

I didn't make the same mistake with the other squad so I fired bolt pistols, had my Jaws cancelled by a psychic hood (I had every power that could be stopped stopped on the day) and unfurled my wolf banner, unfortunately my boys fluffed their lines and we drew the combat thanks to an epic failure from my power fist and a good showing from Ian's.

Turn two started with a roll for reserves, the dreadnought failed to appear, he forgot about the terminators as did I and the scouts arrived very close to my recent failed combat.

Shooting was fairly inconsequential with only the scouts and the predator left and a long fang died. He also tried to avenger the bunched up squad, he rolled a psychic test, double 1, loses a wound but still get the power off, it was at that moment that the wyrd started to billow around my Rune Priest and the warp was sapped of its strength ( a game changing roll? Perhaps).

The scouts had a choice to shoot at my remaining fully capable long fang pack or support the stern guard in combat who surely shouldn't be able to survive. The scouts chose the latter and headed in to combat, my grey hunters and the stern guard exchanged blows whittling each other down but his scout sergeant with a power sword was excellent killing 2 grey hunters, grrr another drawn combat.

It was then time for my difficult choice, this was the only mission that was random turn length, I had one objective secured as I saw it, I also was pushing towards the other but the issue with the Open War list is that to make sure of a win you at least need to get 2 and contest the third, I only have 4 scoring units so the question was do I go and support my grey hunters and finish the Stern Guard or make sure I make an objective as secure as it could be. I chose to think back to game three of last year and secure the objective, I did support my grey hunters however in the most unlikely way, one of my long fangs pack had been decimated leaving 1 missile launcher toting lad, he ran in swinging his launcher, cracked the scout sergeant over the head and killed him dead, with that the rest were swiftly dealt with and the squad moved on after exchanging hearty congratulations with a new lone wolf.

Next turn the dreadnought and the terminators arrived, the terminators really should have rolled on the mishaptable but I didn't push the matter and the dreadnought crazily didn't contest an objective but came down to take on a speeder who had done very little all game but try and destroy the immobilised razorback which had lost its heavy bolter. It did immobilise my speeder but by doing so showed its rear armour to my long fangs and it went boom. I now had 3 objectives with nothing threatening them except a squad of terminators on the objective that was being held by my smallest squad in a las plas. The Terminators again shot at my speeder with their cyclone missile launcher (???????) they obviously couldn't assault so it was over to my turn 5.

One thing I missed (on the report not on the game) was that the scouts did manage to glance my dreadnought and rolled a 1, it now couldn't shoot. I then decided to be brave, my las plas shot everything into the terminators killing 2 and my dreadnought piled into them in the hope to slow them down so they couldn't assault my scoring unit. My dreadnought hit and wounded 3 times, killed the two remaining power fist terminators and was left in combat with a power sword armed terminator RESULT.

The game ended on turn 5, had we had another turn or 2 I may have gained an extra bonus point but in the end I was delighted, 15 points for the mission, 8 bonus points for VP's and some well deserved lunch on the way.

Unit of the match without a doubt the rifleman dread, taking out a vindicator is good enough to start with but then to stop a terminator squad from threatening me at all. Excellent.

Game 2 tomorrow, thanks for reading and I look forward to comments.
Posted by Unknown at 07:57