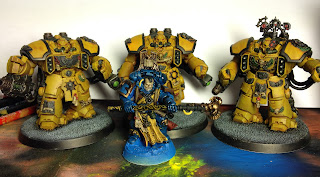 One look at the list across the table from me and I knew I was in trouble, my recent experience with Riptides had been decisive and I’ve seen enough Wraiths to know I had no answer for 18 of them. I figured that I could throw as much firepower at the Wraiths as possible on the first turn or two to try and critically deplete them and ensure that the Centurions survived to take on the Riptide. Of course, the Annihilation Barges and the Destroyer Lord had other ideas.

My opponent deployed his Wraiths in a bubble screen protecting the Barges and the Riptide from my Drop Podding Sternguard. My initial salvo from, basically, everything killed about 4 Wraiths and then he was on me.

The Centurions, Tigurius and a Tac Squad had held a unit and a half of Wraiths for about 4 Turns while my right flank had been comfortably collapsed by the Lord and his Wraith unit. The Land Raider had been immobilised on Turn 1 by the Tank-Hunting Riptide, but it hung in there for another couple of turns until it was exploded by the Lord. 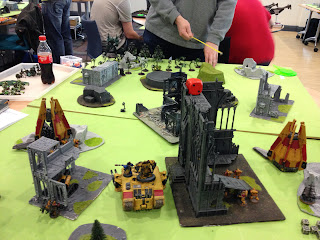 I managed to be tough to chew through though as at the end of turn 6 I still had a unit of Scouts on an objective. The rest were, however, his and I had lost the game comfortably.

Wow, there really weren’t going to be any easy games in this tournament. A heavy loss in the first game has put me staring down an all bike army mixing the Uber Bike Lord with 3 Powerfield-toting Dark Angels Bike HQs to babysit a bunch of Grav, Plasma and Melta wielding Bike Squads.

Again I was given first turn and I decided to take as much of the sting out of his Melta and Plasma Units as possible. He’d spread out across his table edge which took the pressure off a little and his Bike lord was way out on my right flank, staying out of range until the Melta Units had popped the Land Raider and the rest of his army had softened up the Centurions.

While my Alpha-Strike, was again, foiled by poor dice and good 4++ saves (I think I killed about 4 bikes in total!) his return volley was equally ineffective allowing me to bog the bikes down in close combat which effectively took them out of the game for the next 3 turns. As this combat ground on he started to wheel his Lord round to try and bring a swift resolution to it but he strayed into range of the Centurions.

Oh my god! This is what Tigurius and 3 Grav Cannon Centurions can do (with a little support from 5 Sternguard and a Thunder fire cannon); one round of shooting and the whole unit, including the Lord, was toast!

He had a couple of units wide on my right Flank but they were too far out to influence the result of the game now. My scouts jumped onto the Relic while I threw every available unit into close combat which tied up his Bike squads until the end of the game.

The game ended on Turn 5 and I had the Relic and the win, if it had gone to Turn 6 I think I would have been in trouble but fortunately for me it didn’t. It was a tense, back-and-forth against another great opponent and the Centurions had finally lived up to their billing!

OK, 1 Win, 1 Loss and now I’m facing Chris Dickinson, a man who almost qualifies as part of the Hive Mind, and his Tyranids. Fortunately I am rather experienced with Tyranids, unfortunately Chris is a far better player than I am. This time I take second turn, Chris sets up to prevent me from dropping my Pods in rapid fire range of his Tervigons and a turn of spawning ‘Gants makes that proposition even more daunting!

His Tyrants position themselves to assault in turn 2 the Tervigons try to bury themselves behind terrain. However I manage to position my Land Raider to give it LOS to the nearest Tervigon, I manage to pull off a risky double Drop Pod drop and get both Sternguard just inside 12” of the Tervigons and sure enough, one goes pop taking with it a swathe of Gants. All of a sudden this is looking good. 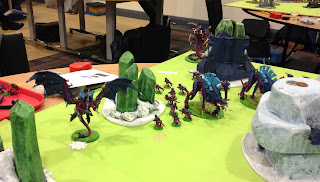 Turn 2 and it’s all in the balance, Chris’s remaining Tervigon bungs up after spawning 15 Termagants and his Hive Tyrant leaps over cover but only manages to take a weapon off the Land Raider. The Sternguard are eaten unceremoniously, their work is done and the Ymgarls make contact with a Tactical Squad in the backfield. I make a bit of a mistake in jumping my Centurions out of the Land Raider to take out the Tyrant in front of it. It’s basically overkill and leaves them in the open …

… and Chris takes full advantage. Doom Drops in, I roll a 16 on 3D6 and after rolling a couple of 4++ saves (thanks to a Divination Power) one Centurion remains on a single wound. The game has taken a turn for the worse. The Tyrgon and (now S10) Doom move in to finish off the Land Raider and the remaining Centurion which they do easily.

Tigurius is on his own surrounded by big beasties so he charges the Mawloc hoping to sell his like dearly. He eventually Force Weapons the Mawloc before succumbing to the Doom.

When the dust settles Chris is sitting pretty on 4 objectives and all I have left are a couple of Scouts and a Drop Pod. Roll on day 2!