Following yesterday's battle-report, here are the first images of my Squats, on the table and ready for action in their battle against the dark forces of the Chaos Daemons.

As you can see, the infantry models are all old Rogue Trader era plastic models from the original plastic box set (in 1993, it was £15 for 36 miniatures...). I have converted the models slightly, giving each a Space Marine backpack and also giving them Cadian IG arms and Lasguns, as I'm not overkeen on the original Lasgun design.
The artillary pieces - counting as Medusas and Manticores - are of course Chimera hulls, with scratchbuilt cannons on top. I wanted the Squat cannons to look more futuristic than the rather old-fashioned Imperial weaponry, to reflect the fact that the Squats are a technologically-advanced race compared to the regression of the Imperium. I wanted the weapons to look more like Plasma Cannons and Ion Blasters than solid-shell cannons. Hopefully I've achieved my goal - what do you think?

Squats Battle Back into 40k!

After nearly three years of planning dithering in near-equal quantities, the first one thousand points of my Squats army is on the table! Whilst they aren't completely finished, they are still more than good enough for friendly games. Of this first batch, the majority are done; all that is left to paint are the barrels on the main artillery pieces, a few arms and to do some basing. However, I was tired of waiting for everything to be 100% ready, so I arranged a practise game with one of our regular gamers, Daryl, a fellow member of the First Company Veterans club (the Thursday night gaming group who play at Warhammer World in Notts).

The game was to serve two purposes - to allow me to try out the Squats using the Imperial Guard codex for the first time, and to let Daryl have his first game of Sixth Edition too. Quite a night of firsts! Luckily Daryl and I are mates, and we definitely play the game the way Jervis intended - a fun hobby to be played with a bit of banter and a couple of pints. This is important, especially when both of you are learning new rules - a new codex for me, and a whole new edition for him!

We picked a table - a WHFB themed board with an enormous citadel in the middle - then started the admittedly laborious process of beginning the game. Mission - D3+2 objectives (we rolled a 1 on the D3, giving us three objectives). Set-up - Hammer & Anvil - ie short table edges. We then rolled for Warlord traits - I can't remember Daryl's selection, but I got the redeployment trait. Usually this would be a dream for Imperial Guard, but as I was facing Daemons, it was totally useless! I hope to roll it again against more conventional foes.

Neither of us had any Psykers, so it was onto the roll for table-half selection. Daryl won, and forced me to go first. A wise choice, as it exposes his Daemons to one less turn of shooting!

Finally, the game got underway, and I quickly deployed my army:

As we were setting up on the short board edges, I was quite limited in width, so by necessity I placed my two Medusas and the Manticore in the middle, with the Hydra occupying the high ground at the very rear of my set-up area. I surrounded the Hydra with the Veterans, and bubble-wrapped the artillery with the twenty-man infantry squad, who were reinforced by the Commissar. Finally I placed the flamer-toting PCS in the foothills surrounding the citadel on the left-hand side of my deployment zone, and the melta-equipped CCS took up position behind cover on the other flank. The purpose of my set-up was to cover as much open space as possible, to deny Daryl's deepstriking Daemons as much of the board as possible.

In my first turn, I rolled my artillery forward, making sure my infantry bubblewrap guarded their front and side aspects. The rest of my army stayed put, as they were already in excellent positions overlooking the open spaces where Daryl's Daemons would most likely materialise.

On Daryl's first turn, the first half of his army arrived. Fateweaver swooped in, and immediately started blasting away at my Hydra, which he took down with ease. His first units of Horrors, Screamers and Flamers all arrived too, and they started to wreck similar havoc upon my twenty-man infantry squad and the veterans.

In my second turn (albeit the first turn I could actually shoot anything) the Squat Guard started blastin'! Remembering to place orders, and with the timely advice of a fellow IG player on the next table, the four Melta-armed veterans of the CCS attempted to 'Bring Down' the swooping Fateweaver. I needed sixes to hit - and promptly rolled three! Despite my luck, Daryl saved all but one... but was that one enough? Fateweaver has a rule whereby he has a chance of leaving the table if he suffers a single unsaved wound! Luckily for Daryl he passed his test and the Daemon Lord, representing fully one-third of his army, decided to stick around.

My two Medusas fired their large templates, each inflicting several wounds and causing some wounds. Unfortunately however, all Daemons have invulnerable saves, so despite paying a premium (in Guard terms, anyway) for high-AP weapons, the Daemons still got to make saves. I did manage to whittle his numbers down a little, though.

In his next turn, the vast majority of Daryl's reserves - including his Pre-Heresy Thousand Sons' Daemon Prince - dropped onto the table, and I immediately began to rue my decision to push up the table so aggressively! My plan was to deny the Daemons any open ground on which to deepstrike, but at 1,000pts I just didn't have enough bodies to do this with. With my Tyranids perhaps, but not my tank-heavy Squat Guard! Instead, I had unwittingly played my rather delicate forces right into Daryl's hands, and he spent two turns happily scrapping my armour with his two Daemonic monstrous creatures and his fast infantry. In particular, the Screamers deserve a mention - their mid-move overhead scything attacks were devastating to my troops!

In the end, the result was a Daemonic whitewash, and a fourth-turn tabling for the valiant Squats. To say they came up a little short would be an understatement (groan...). The game was effectively decided by my over-aggressive deployment - something I shall definitely learn from for future games. But it was great fun, and the sight of Squats once more gracing the tables of Warhammer World made me a very happy man!

In conclusion, then - what have I learnt from my first practise game using the IG codex?

- Manticores are wonderful, especially when they get all three large blasts at once. You can confidently take out one or two small squads a turn with these beauties.

- my Blob Squad wasn't blobby enough - I think forty or even fifty infantrymen are needed to produce a lasting bubblewrap unit.

- Against Daemons in particular, the IG need to start deep and STAY THERE! Apart from shuffling an inch or so to prevent auto-hits in combat, the tanks need to stay as far away from the midfield as possible.

Despite the loss, this was a really enjoyable game. It was played in a friendly manner, with both of us learning new rules. I'm sure we both made progress in terms of how our armies work in Sixth Edition, and I can't wait to field the Squats again in the very near future!

Ok so I've been through this before but will again, today sees the start of our tale of gamers.

I am still torn between going for a necron army which I think are top of the pile in current 40k and shying away from power armour or making a start on a Word Bearers force ready for the new codex which we expect in September.

Its a tough decision, both have their pros and cons so I thought I would leave it to the gods that we trust those of dice so on a 1-3 I shall got with the Necrons on a 4-6 I shall go with the Bearers of the Word 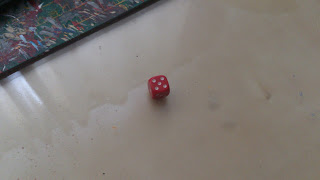 So its the Bearers of the Word I go, first pledge then

I shall paint a land raider first this month because I've had it sat in my room for the last 2 years.