(think of it as a late Monday Musings) 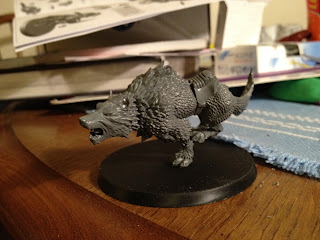 As you can see, I've put together my first Thunderwolf. Before I add the rider I think it's wise to do some thinking about the actual use for the unit. Now, I've seen Thunderwolves used in many different guises since the codex came out - there's the super rock unit of Wolf Lord on Thunderwolf accompanied by 5 of his buddies down to the solo Thunderwolf as a counter-attacking threat. I think that the first option suffers from the same problems as any rock - it's a lot of eggs in one basket. As Mick found out, in some games they'll kick arse and take names and in others they will do very little. I'm also not totally convinced by the solo T-Wolves. Yes, they can easily claim cover behind a Rhino and there are definitely going to be handy against MSU armies in combat.

So, where now for me? I'm thinking of a unit of 3 initially. This feels like a good balance between the two options above and also because there are 3 in the box. It should be easy enough to claim cover with 3 but they are also going to pack a bit of a punch in combat. Thunderwolf units can get very expensive very quickly and I want a unit that on one hand I won't want to throwaway but on the other hand one that I can afford to lose without it making a huge dent in my battleplan...

comes to 235 points. That seems really expensive when you consider that 5 Thunder Hammer/Storm Shield Terminators are only 200 points. However, the T-Wolves are a lot more mobile. So, the plan is that these guys will be replacing some of my Wolf Guard. Unfortunately, I have a badly bruised finger from being landed on by a Running Back at the weekend so I don't think I'll be able to finish the models this week...

I've been thinking a lot about some of the rumours that are flying around the internets regarding rumours for the next 40K Codex and I started thinking, who would I like to see done next. Yes, we'd all like to see a better Tyranid codex but that isn't going to happen any time soon so what would we like to see? The rumours seem to point to Dark Angels or Chaos Legions, although Tau and Eldar are mentioned as outside possibilities. Following the last errata, Dark Angels are actually a pretty good army and while it would be nice to see an update I don't really think they need one right now. Personally, I think there are already too many shooty armies out there so that sees Tau off my radar. Eldar are an interesting one. I would quite like to see them being redone as their unit speciality makes them a pretty unique army on the tabletop. However, I have to admit that I'd much rather see a "big book of Chaos" The good guys have had it their way too long, it's time for the bad guys to shine.

Now, when I say "big book of Chaos", I mean, Chaos Legions, Renegades and Daemons all in the same book so that you can pick and choose. This means that you can run your all Daemon list, your all Bezerker army or anything inbetween. I had an idea of a recently renegade army that was in collusion with Daemons because they thought that they were visions of the God Emperor. So, they wouldn't fight with Cult units because they don't realise that they're actually turning evil yet.

Unfortunately, this book won't happen as there is no way that GW would release one book when they can release three and because it would be almost impossible to balance properly.

So, does anybody have any tips for using Thunderwolves? And if you could have any codex released next, which one would it be and why?
Posted by Claws and Fists at 22:30