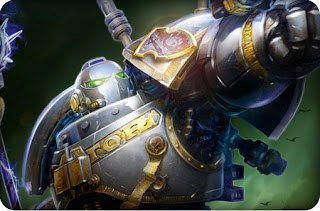 On Claws and Fists we've had some good Exclusives (one of the benefits of living near Warhammer World), Battle for the Fang was our first and new new new new new Dave hit us with the last one with Know No Fear. Well here's another added to the record with The Emperor's Gift.

I'm going to start with a statement, Aaron Dembski-Bowden is Claws and Fists favourite Black Library author. I've never heard Darren say a bad word about him and if he meet The Barons seal of approval then its official.

His Night Lords series was excellent and his Horus Heresy book 'First Heretic' is still my favourite in the series. This time he ventures back into the Emperors good graces with a Grey Knights book with a healthy sprinkling of the blogs favourite chapter.

I've never made a secret that I was a reader before a gamer, the first 2 Black Library books I read were Wolfblade By William King and Dark Adeptus By Ben Counter which of course featured Space Wolves and Grey Knights respectively. The two chapters have remained my favourite and are the only armies I have that are of playable size.

As I was a reader before a gamer the way I have come to judge books is do they make me want to play 40k? Recently I have been in a lull in 40k having been busy with wedding preparations, work and developing a love of bloodbowl so the acid test is does this book make me want to pick up a wolf or knight?

The answer unreservedly is Yes.

ADB begins this book as he did the final Night Lords book with an explanation. During the Night Lords novel he makes it clear that fluff has changed the series he had written.In this book he explains that the release of Codex Grey Knights changed the book he was writing.

The book is written from the perspective of one young Grey Knight, Hyperion and through the course of the book we see glimpses of his indoctrination in the most secret of Chapters, through the first War of Armageddon and beyond. As ADB explains, its not a book of the War because the War doesn't belong to the Grey Knights it belongs to the Defenders of Armageddon, it is the book on the build up and the aftermath of the war.

So what did I love about this book?

Firstly, its grim-dark. No one does it better than ADB in my opinion. Abnett took the Wolves forward in this Universe from the foundation that William King laid and ADB has continued that with them and done it wholly with the Grey Knights. They aren't and in my opinion shouldn't be what others including McNeill, Counter and everyone's favourite Codex writer Mat Ward has made them out to be. They aren't as different from Astartes as Astartes are from Guardsman. They are specialists, they are called in to deal with a specific threat, perhaps the greatest one but still a specific threat. ADB reminds us of this.

It features flawed characters. I don't want perfection from a soldier, even a Astartes, I like the reminder of humanity that failure shows. While Justicar Alaric (Ben Counter's main Grey Knight character) was flawed it was a flaw in the same vein as Uriel Ventris, he didn't agree with standard tactics but in doing so he wins the battle. Not so with Hyperion he makes mistakes, they have repercussions.

He shows the relationships between The Inquisition and the Grey Knights in vivid detail and also goes into details of the hypocrisy of the Inquisition which I love. Inquisitors using heretics and Xenos weaponry shouldn't be allowed and yet it is. The inquisition was designed to save the Imperium and yet it slaughters more Humans than anyone. It always seems to be pushed to one side but not in here.

And finally (in this review although don't think that that's all the book is) the scale of the warfare is excellent, it moves from squad fighting to all out war against an enemy (who we all know) that shouldn't be defeated. It doesn't over do the battles, it does them perfectly.

Of course this wasn't a perfect book there were some things I wasn't particularly taken with.

One of them being the name checking of in game items or Units, it seems to be a common occurrence in Black Library books, in Know no fear we had a Contemptor chucked in for nothing, in this book it was the main character carrying a Nemesis Warding Stave. It didn't take up a lot of the book but I think I would have liked him a little more if he was carrying a Daemon Hammer or a Halberd.

My other gripe was the Inquisitor. I just wasn't taken with her. A native of Fenris she didn't characterise the idea of a Inquisitor in my mind. She broke too many rules (Radical I know) big ones as you come to see. She let her personal feelings dictate policy too much and she makes some serious errors. Now I know, hypocritical of me to say I loved the main character because he had flaws but dislike this one because of it however a young Grey Knight should be expected to be imperfect would a Inquisitor get to leading Grey Knights if it was the same for her?

Overall I loved this book, I shall certainly be reading it again and again.

Let me know what you think.