Svengril Icefang sat in the center of the circle, the Wolf Guard all intently watching him. He cast the Runes and then he cast them again. He cast them for a third time and then looked up at the chosen troops of his Wolf Lord, Rangnar Blackmane. "The Runes have spoken. I see the enemy arrayed in their splendour and I see where and when we must strike them" The Wolf Guard nodded as one and left to make preparation for the coming battle.

This is a 1750 point battle report between my Space Wolves and Dave's Marines which comprised a Captain, 2 10-man Tactical Squads, a 5-Man Scout Squad, 5 TH/SS Terminators in a Land Raider, a Venerable Dreadnought, a Dreadnought and 3 Vindicators. We were playing Capture & Control with Pitched Battle deployment. Dave won the roll off but passed first turn to me. 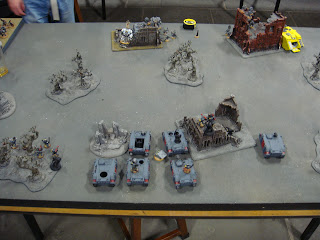 With an ear-splitting roar, the Space Wolf Drop Pod descended through the atmosphere, landing right in front of the Marine Land Raider. The 4 Wolf Guard stepped out ready to try and turn the vehicle into molten slag. At the front of the Space Wolf lines the two lead Rhinos headed forward at full speed before popping smoke. Behind them, the transports containing the Rune Priests moved forward as well, but slower so that their passengers could shoot out of the top hatch. The shooting began with one of the Rune Priests using Living Lightning to wreck the Venerable Dreadnought. The second Priest and the two Long Fang Packs both opened fire on the Tactical Squad in the ruins nearest to the Marine Objective but they made good use of cover and only two died. On the far side of the battlefield the Wolf Guard hit the Land Raider 4 times and caused 3 penetrating hits, one of which caused the vehicle to explode. The 5 Terminators emerged from the wreckage looking very unimpressed.

In reply, most of the Space Marine remained stationery so that they could fire their heavy weapons. The only exceptions being the Dreadnought who moved to get a shot around cover and the Terminators who prepared to gain some revenge for the destruction of their vehicle. A Lascannon shot immobilised the Rhino on the Space Wolf right flank and an Assault Cannon shot meant that the leading left Rhino couldn't shoot but a combination of smoke and inaccuracy meant that the Demolisher shell and second Lascannon shot had no effect. The Terminators charged into the Wolf Guard and their Drop Pod transport, easily wiping out the 4 Space Wolves and causing the Pod to explode.
﻿ Turn 2

The first pack of Wolf Scouts arrived on the Space Wolf right flank targeting one of the Vindicators behind the ruins. At the front of the Space Wolf column the Rhinos again moved at full speed before disgorging their occupants. On the right the pack got out of their immobilised vehicle, fearing a charge from the Terminators. One of the Grey Hunter packs targeted the Vindicator blowing off its Demolisher Cannon with a Meltagun shot. The second open fire at the Tactical Squad and along with the Long Fang packs managed to kill 7 Marines. The two Rune Priests turned their attention to the second Tactical Squad and managed to kill 2 more with Living Lightning. The Scouts charged in against the nearest Vindicator and managed to wreck it with Krak Grenades.

The Scouts victory would be shot lived however as the Terminators about turned to face them. Meanwhile on the Space Wolves' left flank the Space Marine Scouts arrived. The Captain left what was left of his squad and prepared to take on the nearest Grey Hunters while the Dreadnought moved around to take on the other squad. The surviving Tactical Marine managed to immobilised another Rhino with hit Lascannon while the Scouts were unable to harm the Long Fangs with their pistols. The Dreadnought killed the Wolf Guard attached to the Grey Hunter pack with its Assault Cannon and then charged into melee. The Space Marine Captain did likewise against the other disembarked squad of Grey Hunters as did the Terminators against the Wolf Scouts. However, the Marine Scouts were just short with their attempted assault through cover against the Long Fangs. The Dreadnought killed a Grey Hunter but the combat remained locked. The Captain merrily cut down Grey Hunters and managed to finish the squad off as he caught them in a sweeping advance. The Terminators also easily wiped out the Scouts for the loss of a single man.﻿

The second Wolf Scout pack turn up at the back of the Space Marine line. The squad in the third vanguard Rhino disembarked ready to try and take on the Space Marine Captain. Behind them, one of the Long Fang packs split their fire, killing 2 Scouts and the final Tactical Marine. The other pack, the 2 Priests and the Wolf Scouts opened fire at the Tactical Squad killing 2 Marines. The Grey Hunters in the centre opened fire at the Captain but couldn't wound him at all. He smiled as he planed to cut them down. The Wolf Scouts charged in, killing 2 Tactical Marines but losing 2 of their own number leaving the combat deadlocked. The Dreadnought killed another Grey Hunter but they managed to Stun the walker, leaving that combat locked as well.

The two remaining Vindicators were both on the move. The weaponless one rammed the immobilised Rhino, destroying the Rhino's Storm Bolter in the process. The other moved to get a shot at the Grey Hunters who had failed to kill the Captain. Meanwhile, the Terminators began their long march toward enemy lines. The Vindicator lined up its shot but it managed to deviate and catch the Captain as well as three Grey Hunters. 2 of the Space Wolves died and they made a tactical withdrawal and the Captain was instantly killed by the force of the blast, his Iron Halo not saving him this time. At the rear of the Space Wolf lines, the Scouts charged into the Long Fangs. The veteran Wolves killed two Scouts but lost one of their number in return and the combat stayed locked. The Dreadnought killed another Grey Hunter but they stayed in combat. The Wolf Scouts killed 2 more Tactical Marines for the loss of another Scout but that combat remained locked as well.

On the Space Wolf right the Grey Hunter back disembarked again and prepared to fire at the Terminators. Unfortunately they were unable to get through the combination of Storm Shields and Tactical Dreadnought armour. In the centre the unengaged Long Fang Pack blew up the Vindicator that had killed its own Captain in the previous turn. In combat, the Long Fangs killed the Scout Sergeant before he could swing with his Power Fist and the Wolf Scouts finished off the Tactical Squad. The Dreadnought killed 2 more Grey Hunters, leaving just one, who remained steadfast and would not leave the combat.

The remaining Vindicator, having performed a successful ram, tried to do it again but couldn't build up the speed and so caused no damage. The Thunder Hammer Terminators charged into the impetuous Grey Hunters and killed 2 for no loss but couldn't sweeping advance when they fled from combat. The Dreadnought was unable to finish off the last Grey Hunter as he ducked under the swing of his Dreadnought close combat weapon.

The Grey Hunters who had been sent scurrying by the Vindicator blast earlier took the opportunity to claim the Space Wolf Objective. Meanwhile the left Long Fang Pack fired into the rear of the Vindicator, blowing it up. The other pack and the Rune Priest who could see, fired at the Terminators, killing one and forcing them to flee. The Dreadnought once again failed to finish off the last Grey Hunter.

The Terminators sensing the end was near charged into the immobilised Rhino, wrecking it. Meanwhile the Dreadnought could still not kill the last Grey Hunter.
﻿

He woke up from a nightmare of a metal monster towering over him, his pack brother dead at its feet. Even though he had been genetically altered to feel no fear, he could feel the cold sweat on his skin. And that was the thing; it wasn't from fear, it was from shame. The thing had badly injured him before it had fled the battlefield but he had lived where the rest of his pack had died. Erik the Red, the company's Wolf Priest had tended to his wounds and had praised his bravery for standing up to it alone. And yet, he still felt shame. The battle had been won with ease. And yet, he still felt shame. The chapter's skalds had sang his saga, about how close he had come to besting it in combat. And yet, he still felt shame. His closest friends were now in the Halls of Russ, where they would fight with the Allfather at the end of time. There was only one thing to do - he would have to petition Lord Blackmane for the chance to avenge his dead brothers. He would have to become a Lone Wolf...
Posted by Claws and Fists at 02:00