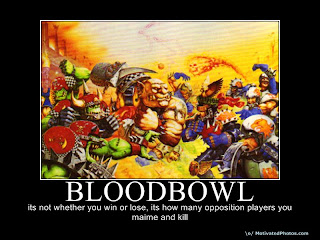 This weekend I and four other guys from the club (including our very own “thebaron”) headed over to Warhammer World to take part in the annual NAF Blood Bowl Championship. This was my first Blood Bowl tournament and I wasn't really sure what to expect. Given my experiences playing in our club league over the last year I was well aware that I am far from a good Blood Bowl player but I was hoping the what I learned would allow me to at least hold my own!

Game 1: vs Lizardmen | Loss 1-3 | Casualties 1-2
Crox, 6 Saurus, 4 Skinks, 3 RR
I took Block on an Ulfwerner.
Pretty rough opener but at least it didn't give me any false hope early in the day! The Lizards had me out muscled and put quite a few of my players in the dug out early doors. He also protected his Skinks well, so there were no easy ways to even up the numbers and reduce his ball-handling ability. Rather than my usual cage I tried a sweep behind a screen which got me my first TD of the day. Sadly I was already 2 down after a pretty bad first half and it didn't take him too long to put in a third to finish off the game.

Game 2: vs Goblins | Draw 1-1 | Casualties 6-4
Pogo, Chainsaw, Fungus the Loon, 2 Trolls, 9 Goblins, 3 RR, 2 Bribes
I took Tackle on the Beserker
The sneaky Goblins put up a tough fight but fortunately their secret weapons were not particularly deadly unfortunately the Trolls didn't fail either of the regen rolls I made them take. I conceded a TD in the first half when I over-committed and the pogoer raced out of range for an easy score. I managed to hold firm under pressure from the bribed in secret weapons and once they were gone the casualties started to pile up for me and I pulled a score back to salvage a draw.

Game 3: vs Chaos | Win 2-0 | Casualties 2-3
Some horribly broken roster involving lots of horrible gribblies
I took Dodge on a Runner
Who should I find sitting across the table from me at the end of day one but non-other than our very own commissioner Scott, I knew this was going to be a tough one. Clearly Nuffle had other ideas as he decided to bless my dice with the sort of rolls usually reserved for Scott when he's throwing long bombs with his Khemri! We'll not dwell on the specifics but suffice to say while my dice were hot Scott's were ice cold. TO be continued in RRI4

Game 4: vs Wood Elves | Loss 1-2 | Casualties 2-0
Treeman, 2 Wardancers, 2 Catchers, Thrower, 5 Linemen, 1 RR
I took Sure Hands on a Thrower
One of the members of the stag-do present at the tournament who had come all the way from from Madrid and were dressed as a Norse team on Day 1 (the stag was dressed as the Yhettee!). He made me kick to him in the first half and I thought 2-1 grind to myself, sadly I had it the wrong way round. In a very un-Elfy move he ground out almost the entire first half finally scoring on his turn 8. Unhelpfully I could not roll anything higher than a 7 so he was under no pressure at the start of the second half. I managed to progress steadily down the field and scored in turn 4 leaving him way too much time to score the winner. My best “prevent defense” was found wanting as he managed to execute a short pass on his turn 8 to give me no chance of tying the match.

Game 5 vs Wood Elves | Win 2-0 | Casualties 4-1
2 Wardancers, 3 Catchers, Thrower, 5 Linemen, 2 RR
I took Tackle on a Lineman
I played probably my best game of Blood Bowl ever here and my opponent's dice were terrible just to really rub salt into the wound. I kicked to him in the first half and got a blitz which allowed me to run under the kick and catch it with protection. After a couple of turns of back-and-forth action I had a solid cage formed and I patiently made my way down the field scoring on turn 8. The second half saw me gather in a short kick and again patiently make my way down the field. Taking my opportunities to make blocks where I could but not over-committing. The Wardancers had clearly angered Nuffle earlier in the tournament as he did not make a single successful leap all game.

Game 6 vs Orcs | Tie 1-1 | Casualties 1-2
4 Black Orcs, 4 Blitzers, 2 Linemen, Thrower, 3 RR
I took Block on an Ulfwerner
My opponent elected to kick to me and chuckled “2-1 grind”, he had not reckoned with his Thrower's recently greased palms. I rode my luck with some pretty fortunate 1 dice blocks and scored without much trouble in turn 4. On the return kick off I managed to get in behind his lines quickly, which left me a little exposed but fortunately for me his thrower failed on two separate attempts to pick up the ball. I took a risk and tied up the rest of his team sending my Thrower to pick up the ball and leaving him 1-1 with the Orc Thrower. Sadly my opponent's 1 dice blocks were as good as mine and I could not take advantage of the ball in hand. However I had managed to put the tying TD out of his range. So the second half kicked off and it became clear that he had no intention of going for a win. He pushed the ball quickly to my goal line and sat there surrounded by Black Orcs and Blitzers until turn 8 when he went in for the tie.

A pretty disappointing way to end the tournament, particularly as neither of us had anything to play for, none-the-less finishing with a 2/2/2 record was a pretty good showing for me and more than I had expected going into the Tournament. The NAF championship gets a big thumbs up from me, it was run pretty smoothly and the only gripes I had did not really affect my enjoyment of the two days so I'm not going to bother bringing them up here. If you enjoy your Blood Bowl, I suggest you sign up to the NAF and give it a go.
Posted by Unknown at 23:38