When I go to a Tournament I'm not there to try and win, I'm going to have a good time and play some fun games and for me that's all about both sides being able to say they really enjoyed the game. For me game 2 was that game in this tournament. Looking at the models on his tray I got a real sinking feeling as it looked a lot like an IG Leaf-Blower variation and I thought "bugger it this is going to go south pretty fast". Anyway, I put on a brave face and got him to talk me through his list, I'm afraid I can't remember the specifics but here's the gist of it:

One thing I failed to notice and would have given me some comfort was the fact that there were no Leman Russes, the lack of AV14 would seem to make this list a lot less threatening, still, quite a lot of firepower to cope with!

The mission was Annihilation with Dawn of War deployment. I decided I'd need to make the most of the cover of night in the first turn so on winning the roll off I elected to go first. Taking a leaf out of Gav's book I deployed my two Rhinos 7" onto the table so that on turn 1 I could get my Tac Squad and Lascannon Sternguard squad into good positions. He deployed his command squad in good cover diagonally opposite to my Rhinos, maximising the range between us.

OnTurn 1 I dropped the empty drop pod behind the ruins in the middle of the table, rolled my units on to the left side of the board, moving the Tac squad Rhino into the centre nd popping smole to give cover to the rest of my units. I turbo-boosted my Land Speeders down the extreme left flank and brought my Thunderfire Cannon up the middle towards some ruins I had bolstered. Thanks to night-fighting his Chimera was not in range so that was that for my turn 1.

My opponent rolled his mass of armour onto the table, the Hydras and Manticores moved on to the centre of the table and his Medusa came on on the right flank behind his three Chimeras. The Vendettas spread across the front of his lines. Thanks to some poor night fight rolls and my smoke cover save I got away from his turn of shooting completely unscathed.

At the start of Turn 2 I got Lysander and his Sternguard units and the gloves were off, the Thunderfire Cannon rolled into the ruins. I unloaded everything into his front lines resulting in 1 destroyed and one stunned Vendetta, 1 deastroyed and one stunned Hydra, 2 destroyed Manticores. Not too shabby! In reply A unit of Veterans exited the stunned Vendetta and another came to support them from one of the Chimeras to take down Lysander and his Sternies. In a starteling reversal of form Lysander and the unit withered the storm and held their ground despite heavy losses. Other than that all he managed to do wa to stun a Land Speeder, this was a suspiciously good start for me. 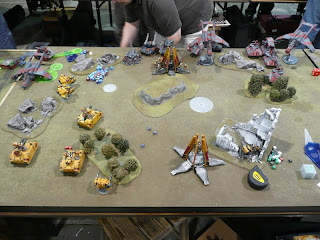 Turn 3 was a little less awsome, My long range shooting was less impresive this turn only managing to stun the nearest Vendetta again and the Thunderfire Cannon only had limited success against the Veteran squads in the centre of the table.. Assault was slightly better, each of the remaining Sternguard combat squads attacked their respective Veteran Squad assailants and Lysander peeled off and took out the remaining Hydra. The result of the Sternguard assaults was one all with the squad on the left running down their Veteran Squad and the squad on the right falling under the weight of attacks against them. Fortunately the IG suffered from abysmal dice again and I got away from his turn relatively unscathed, though I did lose Lysander and the remaining Sternguard to massed lasgun fire bit of a bummer but I was expecting it, they had done their jobs. 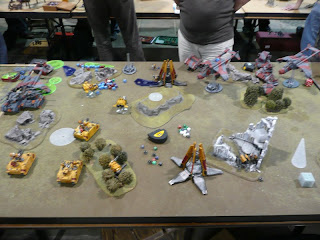 On turn 4 the game started to slip away from me, I managed to take out the second Vendetta and the rest of the guard squad on the ground in the centre table but his shooting was more meaningful. My Rhino in the centre of the table was wrecked and he took out one of the Drop Pods for another kill point. More importantly, however he managed to take out one of my Land Speeders and knock the Launchers off the other one. This basically killed the long range anti-tank shooting I would be able to bring to bear in the next turn and as all he had left on the board was AV12 I would not be able to get any more kill points in turn 5. Bummer! 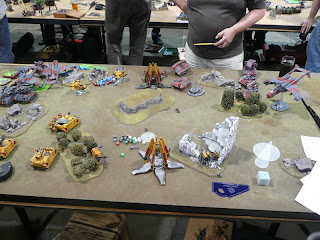 In turn 5 I maneuvered as best I could to deny him the opportunity to get any other kill points, but His remaining Vendetta was able to get a line on the remaining Land Speeder which was easily dispatched, followed quickly by the remaining Drop Pod which withered quickly under all of his remaining anti-tank fire. 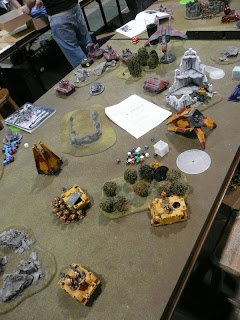 It was a good game and one I had a really good chance in at pretty much every turn right up until the last one. My opponent recovered really well from what must have been a pretty demoralising top of turn two when my shooting really cut a swathe through his lines and he was able to weather the storm and pick off kill points consistently in every turn. Perhaps I would have done better if I had dropped Lysander into his troop transports as there were more kill points available there but I thought his artillery was of more danger to my own lines and I think it's pretty much a coin flip decision really.

Result - Minor Loss (7-9)
MVP - No stand-out in this game all the anti-tank weaponry really pulled it's weight.
Posted by Unknown at 21:58