The two Rune Priests sat side by side in the great drinking hall upon the Strike Cruiser, each with a tankard of ale in their hand. "This is most troubling news" said the first. "Yes, Space Marines allied with xenos". "And what of the other rumours? That the planet below is a Squat stronghold" "Hmm, it would appear that they aren't quite as extinct as we'd been led to believe" For a moment they were both quiet as they each reached into a small leather pouch at their waists. They both pulled out a set of runes and cast them upon the wooden table. Without a word they looked at each other, nodded and stood up. The drinking hall went silent and all of the eyes in the room fixed on the two Priests. "Brothers", said the first, "eat well and drink well." "For tomorrow", continued the second one, "we make war." A huge cheer went up and the Rune Priests allowed the merest of smiles to crack on their lips.


We were playing doubles; Michael's and my Space Wolves versus Andy's Blood Angels and Graham's Squats. 1000 each standard FOC. We rolled up Annihilation with Dawn of War deployment. We won the roll off and decided to go 2nd.


As the very first rays of sunlight began to pierce the dark sky, the sound of a Land Raider engine broke the early calm. Struggling to keep up with the armoured behemoth a Squat heavy weapon platoon moved into position atop a hill. Svengril watched all through the eyes of his Psyber Raven, "that's it", he thought, "keep coming, right into the jaws of the wolf". 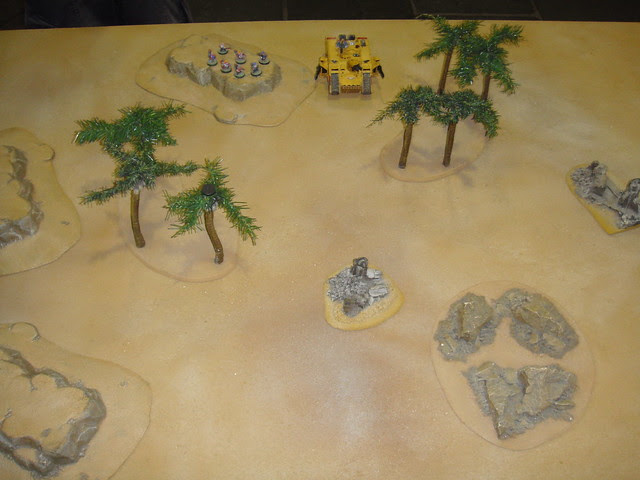 
The Space Marine Drop Pod screamed through the higher atmosphere, its retro rockets slowing its decent as it got nearer to the ground. The second it touched down the doors were blown and out stepped a Furioso Dreadnought. He looked around, slightly bemused as there were no enemy troops on the battlefield yet. Behind him, the Land Raider, filled with a Librarian, Sanguinary Priest and an Assault Squad moved up. Ever further to the rear a Razorback zoomed on the field of battle and a Squat airship floated menacingly into place.


With a great howl, the two Lone Wolves led the Space Wolf charge. On the left a squad of Long Fangs took up a firing position while two Land Speeders flew overhead determined to stop the Dreadnought before it could charge them. In the centre the two Razorbacks and 2nd Long Fang pack moved into position. On the right flank the two army commanders entered the field, one in a Rhino, one on foot, supported by two further Rhinos. The two Rune Priests both cast Living Lightning against the Airship and managed to prevent it from shooting. On the left flank, the two Land Speeders both fired their Multimeltas, and the two Razorbacks both fired at the Dreadnought but they only prevented it from shooting as well. The initial Space Wolf strike had not gone well and now they would face the reprisals. 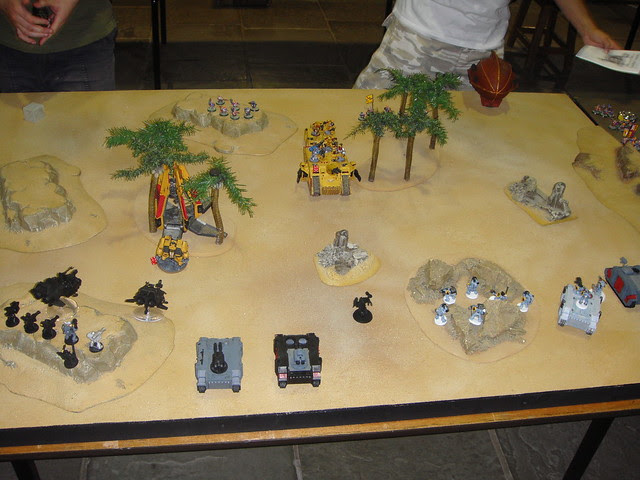 On the Space Wolf left a Baal Predator added its engine noise to cacophony of sound already permeating the battlefield. Everything else moved into prime shooting position apart from the Furioso who readied himself to charge the Long Fangs. The Baal shot down one of the Land Speeders and the Squat heavy weapon platoon manged to sun a Razorback. The Land Raider's Flamestorm cannon brunt through the rocks and managed to kill a couple of Long Fangs but they had seen much worse than this before and stood firm. The first close combat of the battle saw the Furioso charge into the Long Fangs and cut them all down with its Blood Talons.


The Space Wolves had suffered their first losses and were now determined to make up for it. The remaining Land Speeder moved down the left flank ready to attack the Squats on the hill while the Lascannon Razorback moved out of range of the Dreadnought. In the centre the other Razorback disgorged its passengers, ready to attack the enemy one. On the Space Wolf right, the Grey Hunters got out of their Rhino and prepared to stare down the Land Raider with their Meltaguns. Once again, despite all of the firepower at their disposal, the Space Wolves shooting did minimal damage. The Dreadnought, Land Raider and Razorback were immobilised but no damage was done to the Airship. The lone Wolf with the Thunder Hammer managed to rip the Assault Cannons from the Land Raider and the Grey Hunters did the same to the Razorback. It seemed that the Wolves of Fenris had lost the favour of the All-Father 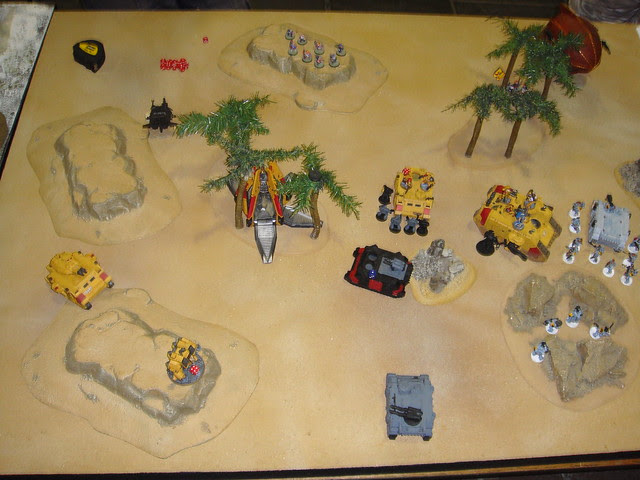 
The Assault Squads in the Razorback and Land Raider lept out, hungry for combat. Instead they found themselves under fire from their own side as a Plasma Cannon blast from the airship scattered off target. Meanwhile the Heavy Weapon Team immobilised the Land Speeder and blew off its Heavy Flamer, saving themselves from the Emperor's righteous promethium. The Power of the Machine Spirit of the Land Raider, angered by the impetuous Lone Wolf's attack fired it's Flamestorm Cannon on the Long Fangs, killing two more. Behind them a squad of Squats moved up, ready to support the Space Marine attack. Inspired by the Sanguinary Priest, both Assault Squads and the Librarian piled into combat. However the larger Grey Hunter Squad unfurled their Wolf Standard and the combat ended in a stalemate. In the combat around the Razorback the Space Marines caused enough damage for the Grey Hunters to make a tactical withdrawal. The victors consolidated their position but could see they were about to be charged by a Lone Wolf.

With still no sign of the three Wolf Scout squads, the Space Wolves realised it was time to start doing some damage. Assault Cannon fire strafed the Squat Heavy Weapon Team's position but they stood firm despite taking casualties. The two Rune Priests once again managed to stun the airship much to the relief of the enemy Space Marines. At the rear of the battle, the Lascannon Razorback turned its attention the the Baal Predator and reduced it to little more than scrap metal. Finally the Space Wolves had destroyed an enemy unit! In the centre the two Lone Wolfs joined the fray. The one with the Lightning Claws cut down the enemy Librarian, tilting that combat in the Space Wolves favour while the Thunder Hammer armed one cut down a couple of Assault Marines but the remaining member of the squad stayed locked in combat. 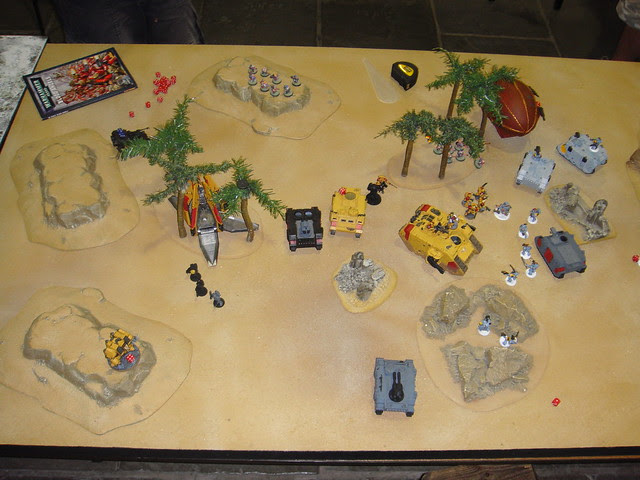 As the Land Raider moved round to get better position for its Flamestorm Cannons, it managed to immobilise itself on the terrain. With the Space Marine charge faltering and their reinforcements still not here, the Squats decided that they had to get into combat themselves. The Squat Heavy Weapon Team once again proved accurate with their fire as they destroyed the Assault Cannon Razorback. What remained of the large Assault Squad fell back towards the trees while the Airship tried to gain some protection form the almost constant Living Lightning barrages by hiding behind the same tree-line. The Thunder Hammer Lone Wolf was unable to win his combat and so stayed locked. The Squats launched their assault into the Grey Hunters and second Lone Wolf and while their losses were heavy, they stubbornly stayed in the fight.

Things were starting to look up for the Space Wolves and they were determined to press home the opening they had been given. With a howl, all three units of Wolf Scouts entered the fray, one on the left flank, one on the right and one directly behind the Squat Heavy Weapon Team. A meltagun blast destroyed the enemy Drop Pod and the remaining Razorback wrecked the Land Raider with a well placed Lascannon shot. Despite the tree cover, the Squat Airship was once again stunned and so unable to fire. The two Rune Priests exchanges rueful glances, next time they would just bring a pin and be done with it. The Thunder Hammer Lone Wolf finally managed to cut down the last of his opponents and started looking around for his next foe. The 5 man Grey Hunter squad from the Rhino stepped out and charged the final Space Marine squad. Both combats in the centre of the field were bloody but remained unresolved. At the rear of the Squat forces the Wolf Scouts charged into combat hacking down Squats encumbered with heavy weapons but they still stood firm. 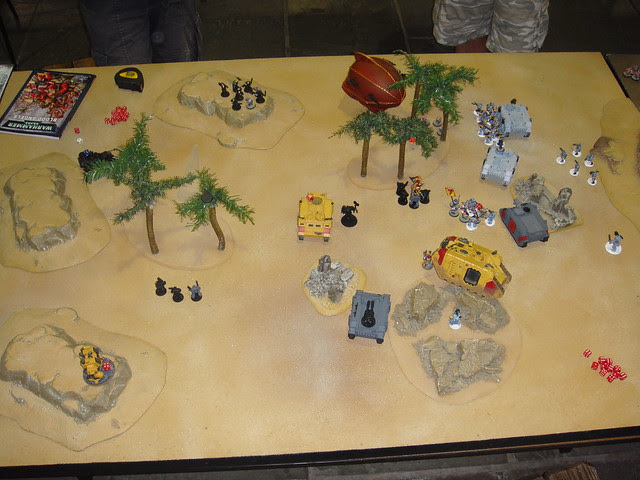 The end of the battle was nearing and both side realised that any move now could prove decisive. The Squat Termite finally arrived and drilled up near the large Grey Hunter squad deep in Squat territory. The still immobilised Dreadnought managed to shoot a Grey Hunter in the back but there was little else the enemy could do. The two Squat combats remained resolutely locked but the Space Marines got the upper hand over the Grey Hunters who decided that discretion was the better part of valor.
The Wolf Scouts on the left flank managed to blow an arm off the Dreadnought while the Airship was once again stunned. The Land Speeder which hadn't fired since it had been downed fired its Mutlimelta at the Space Marine Razorback wrecking it. The large Grey Hunter squad and the Scouts on the right flank pooled their fire and cut down most of the Bezerkers just as they had emerged from their Termite. They them teamed up on the remaining bezerkers and the Termite and managed to wipe out the Squats and immobilise their vehicle. The other Wolf Scout squad finally finished off the Heavy Weapons Team but couldn't do any damage to the other Squat squad that had charged them. In the final Squat combat, the Priest was cut down but two members of the squad still remained. 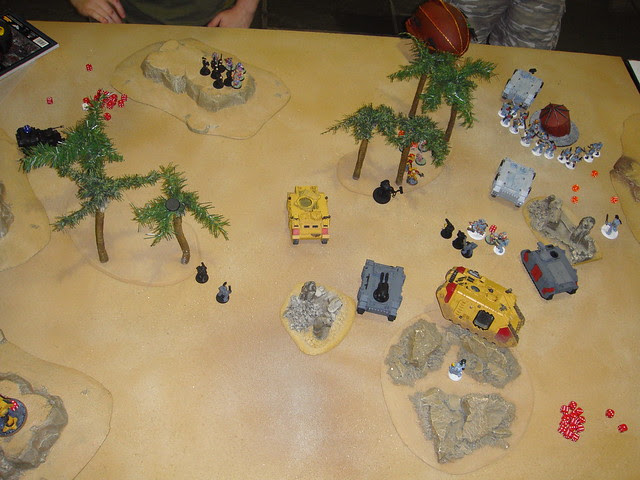 The Squats knew that the battle was lost and made hast back to their stronghold. The remaining Space Marines and their Dreadnought knew that they would be shown no mercy and so took their own lives in hope of gaining some level of forgiveness from the Emperor. The Space Wolves let out an almighty cheer at their victory. Tonight they would drink well. Tomorrow, their was a Squat stronghold still to storm.
Posted by Claws and Fists at 22:00