Review of 2013 - A Personal Reflection

Ok, so it's a little early but it's nearly that time again where we all stop, take stock of the past 12 months and begin to think about the year ahead!
This year saw the culmination of quite a long-term plan for me, which was to field an army of Squats in 40k. And not only did I achieve this goal, I also won a prize for it! At the Blog Wars IV tournament in December, my army was voted Best Painted, which was a total shock but also very gratefully received. The army has been quite a labour of love for me...
It all started back in December 2009 when I had the idea if writing my own codex for the Squats. I researched other Squats codexes on the tinternet and found that the 'market' was actually quite saturated, but the vast majority of them were revisions and re-imaginings of the old second edition army list. There is of course nothing wrong with that in ess ence, however in my opinion the Squats can be so much more than bikers with Thudd Guns and STC Rhinos & Land Raiders - in fact it smacks of a lack of imagination and vision.
So I began to think about what gives the Squats their unique character, and for me it comes more from Epic than it does '28mm' 40k. In that system, the Squats were far more fully fleshed out as a race, especially in terms of their technologies - Termite, Mole and Hellbore tunnellers, Overlord airships, Iron Eagle gyrocoptors and (my personal favourites) Land Trains. These units could translate immediately in modern 40k with very little tweaking necessary. And so I began work on my own fan-written codex - or Fandex - which, in fact, I am still working on. Presently it stands at some 90+ pages, and WILL see the light of day at some point in 2013 I hope. 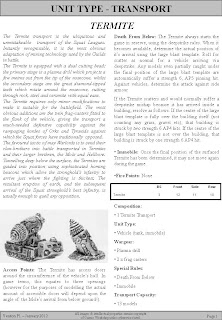 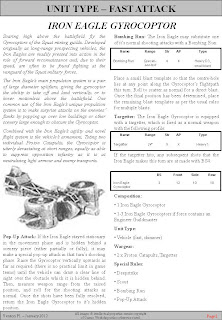 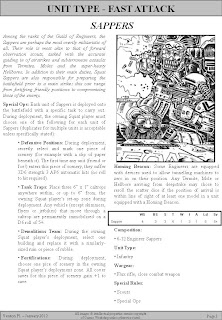 In the meantime, I began building models for my Squat army. I started by scratchbuilding a pair of Overlord airships and two Termite transports. I also invested a fair chunk of money in resin models from the excellent Ramshackle Games, but unfortunately all this coincided with the rather draconian blanket ban of all non-GW models at our local gaming club (Warhammer World, no less!). I have no qualms with GW's decision, as it's their flagship venue and if course they want their products showcased, but our Thursday night club - 1st Company Veterans - is a closed-doors gaming night, so no-one except club members would see the non-GW models anyway! I should say now that I never actually took any non-GW stuff to Warhammer World so it wasn't me who caused the rift which had pretty much decimated our once-thriving club!
So for most of 2010 and 2011 my attentions were diverted away from Squats, and instead I focussed on Tyranids - which, since I mothballed them, have become one of the stronger 6th edition armies - d'oh!
However Christmas 2011 brought seven Chimeras, which allowed me to recommence work on my Squats, this time in the guise of the Imperial Guard - thus allowing me to field a legal army at tournaments. I lost no time in converting five of the hulls into Medusas, Basilisks, Hydras and a Manticore, and I also made up two Ramshackle 'Grendels' into Colossuses. 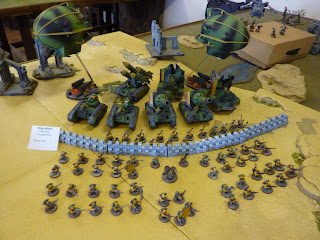 Over the summer of 2012, interrupted by the birth of my first son(!), I fielded the army in a series of practise games against fellow Claws & Fists bloggers Andy, Gav, Dave P and Daryl. My record was relatively poor - played 12, W.0 / D.2 / L.10. And so with that less-than-impressive record, we arrive at Maunsfeld Games (formerly Maelstrom) on Saturday 1st December for Blog Wars IV. You've most likely already seen mine and Andy's tournament reports (we finished 22nd and 24th respectively) but for me the highlight was having my Squats being voted 'Best Painted Army' that weekend! Although I think folks were really voting for 'Most Interesting Army' (there were definitely better painted armies that day), I was none-the-less delighted that my hard work was appreciated by the others. I am a modeller first and a gamer a distant second, and so it's great for me to know that people like my conversions and scratch builds! 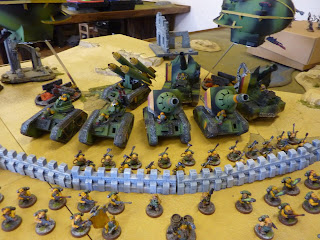