Day Two of 'In The Veiled Region' Campaign

Following my review of the first day of games at Animosity's 'In The Veiled Region' campaign, stand by for day number two...
Game 4 – 2000pts - The Relic
In my first game on Sunday I faced a veritable Tyranid horde, featuring a Mawloc, Tyranid Prime, a flying Tyrant, 2 Hive Guard, 2 Venomthropes, 2 Zoenthropes, forty Hormagants, five Raveners, 20 Devourer-Termagants and five Warriors.
The mission was The Relic. I won the set-up and deployed defensively, but with my two units of Storm Troopers infiltrating forward. My opponent then seized the initiative and pushed forward, with his Raveners closing the gap very quickly! His swarm of Gants 'n' Gaunts also moved up, hugging cover which bunched them up. I took the opportunity to drop Manticore and Colossus shells down on the tightly-packed infantry, killing a fair proportion of his scoring troops in one go. The Chimeras opened up, raining down multiple strength 5 and 6 fire on his Tyranid Warriors, Hive Guard and Hormagaunts. I also used Psychic Shriek from my Primaris Psyker to strip wounds off the closing Raveners.
Happy that I had the horde well in my sights, I was surprised - and not a little shocked - when the Mawloc came burrowing up - right beside my ordnance tanks! The Mawloc caused a glancing hit on one of the Colossus as it arrived, and I knew that it would make short work of the tanks on it's next turn, once it was able to attack in close assault. So, what could I do about it? 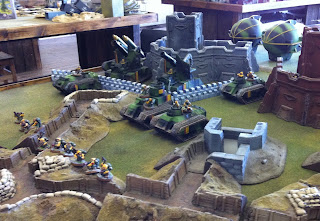 Unfortunately, not a lot! The ordnace tanks were backed right up against a building, and the rest of my army - significantly the Chimeras and their mid-strength shooting - were over the other side of the board, with no way of getting there. So I had to resign my self to losing a tank; however, it meant I could concentrate on finishing off the troops, which were already thinned out and were the only models capable of claiming the relic. After my third round of shooting, I'd just about done it - my opponent was down to only two scoring models left - a couple of Tyranid Warriors - whilst I was at almost full strength (I'd only lost the Manticore and the Storm Troopers). Once again, my opponent graciously threw in the towel, so it was victory for the Squats!
Game 4 result: WIN

This was to be my baptism of fire to the Animosity house-rule - everyone has to play a game on the Forest Moon of Endor! As all Star Wars fans know, those cute lil' Ewoks can be vicious critters, and so it proved in this game.

The game was played out on a forest table, packed with trees and a low hill in one corner. Having won the roll to pick board edges, I immediately picked the side with the hill and placed my Aegis Line atop it, thus giving my ordnance some much-needed line-of-sight over the sea of trees and foliage.

Across the table from me, the Dark Eldar were split in their deployment, with a Raider and a Venom to my right, and two Venoms, some jetbikes and a small infantry unit of Scourges to my left. Needless to say, all were hugging cover! In reserve were three flyers - two smaller craft and one big ‘un, which I've just looked up; apparently they were Nightwings and a Void Raven (I think).
The mission was to claim to objectives, one in either deployment zone. When the game started, I promptly started blastin'. I immediately wrecked the Raider and started to strip hull points off the Venoms, though I was caught out when I found out what flicker fields and night fields do - my guns were down by 6" on their range, and of course there were cover saves galore. None the less, after two turns I had wrecked most of the Dark Eldar war-machines. Even when the enemy flyers arrived, my Vendettas were up to the contest, and managed  to down them in a couple more turns.

All was going well. And then the Ewoks struck...

The Animosity guys have a set of special campaign house-rules, which determines the effects of the death-world (aka Endor) on which we were fighting. It harks back to the forest fight at the end of Return of the Jedi when the Ewoks fight back against the evil Storm Troopers. In our game, the Ewoks decided to fight back against both armies equally indiscrimately, causing 2D6 Strength 3 AP- hits on every unit on the table! This wiped out about twenty models in total; I was mostly unaffected as all but one Veterans squad were still embarked in their Chimeras. My opponent, however, was less lucky - he was already down to only one or two models in four different units, and the Ewoks did a sterling job in wiping all of them of the table. So whilst he only lost about half-a-dozen models, he actually saw four units removed from play.

By turn four, it was all over. The Dark Eldar were down to about three Warriors, so we decided to call it a day. Victory number four of the weekend put me on equal standing with Dave McGurdy at the top of the campaign standings!
Game 5 result: WIN

So, this was it. The final game of the weekend saw Dave and I paired together for a climactic last battle to decide the overall winner of the weekend, whilst the other guys played a five-way city fight against each other.

Dave was using Chaos Space Marines, and his list included 2 Heldrakes, 2 Chaos Marine squads with meltas and an attached Lord each, 2 Dreadnoughts with Autocannons, a Defiler, 2 x 20 cultists and 2 x 2 Obliterators.

We decided to play the Scouring, as it was the only mission we hadn't played that weekend so far. The campaign Games-Master (Geordie Scott) also gave us an extra 3 VP objective to fight for. So, there were seven objectives in total. I set up in my usual formation - ordnance tanks behind their Aegis Line, and the Chimeras partially obscured behind whatever cover they could find - in this case, a series of trenches and some low-level ruins. Dave set up in the opposite corner (we rolled Vanguard deployment), with all his models apart from the Rhino-mounted Marine squads hiding in some battlements.

I started first, and began to pound Dave's forces. Unfortunately, my ordnance guns were less effective against 3+ power armour than they had been against the relatively lighter armour of the Dark Eldar, Orks and Tyranids, and so my first round of shooting only resulted in one dead Obliterator.

Dave's turn one was similarly unspectactular. He pushed his two squads of Marines, mounted in their Rhinos, aggressively forward, clearing hoping to disembark on turn 2 to use the squads' meltas to wreak havoc on my Manticore and Colossus'. He then began shooting with his Dreadnoughts, Defiler and Obliterators, however he only caused minimal damage.

It was my turn two where my fortune began to fade. I had two Chimeras, laden with plasma-totin' Veterans, safely tucked behind some low ruins. Dave has wisely deployed far away from them, so I had to move these units to bring them into the game. Unfortunately, both immobilised themselves as they tried to drive through difficult terrain! This led to my two most effective infantry units being stranded far away from any objectives - or enemies! On a more positive note, both my Storm Trooper units arrived from deepstrike directly behind Dave's two Rhinos. The Storm Troopers were carrying Meltas, and so made short work of one Rhino, but alas the second remained intact.

On turn three, the game swung dramatically in Dave's favour when his Helldrakes arrived. These two flying monstrosities are terrifying, equally able to deal death to both tanks and infantry. Each turn, the Helldrakes zoomed around my backfield, stripping hull-points from my tanks and killing swathes of infantry. For some reason my Vendettas were unable to put a dent in either of the Chaos flyers, and so my fate was sealed. Try as I might to concentrate on whittling down Dave's scoring troops, I had to divert precious firepower to try and take down the Helldrakes - and there lay the reason for my downfall. If I had concentrated everything on the Helldrakes for a turn - Chimeras snap-firing, plasma-vets, even the heavy bolters from the ordnance tanks - then I may have managed to down them. As it was, I didn't, and so Dave had the luxury of burning me off the table.

In the end, the game finished with a 12-6 victory to the forces of Chaos, and Dave rightfully took the top spot for the weekend. It was his clever use of cover for his Dreadnoughts, Obliterators and Defiler, and the impressive firepower of the Helldrakes, which won the day.
Game 6 result: LOSS
Weekend Summary
All in all, I had a great time! The group of lads were very friendly and welcoming, and all our games were played in a spirit of fun. The narrative that underpinned the games was also good fun, and helped to put our disparate games into a common context. I can strongly recommend anyone looking for a slightly different wargaming experience to try a narrative campaign - and I hope you enjoy it as much as I did!
Posted by Grazer at 22:13