As I mentioned recently, I've had a considerable period of time where I couldn't get down to my local club to play a game, so instead I had to console myself with planning new armies. The armies I have, or plan to have, are Chaos Marines (done and in use), Tyranids (in the process of being painted), Heresy-Era World Eaters (my quickie 'suitcase' army for when I travel for work), Squat 'Guard' (infantry done, tanks made but yet to be painted) and Exodite Eldar (currently just one mock-up model of a Guardian Dragon-Rider - see below).

I have tried playing Eldar before, but I found them a little soulless. It was a little like doing A-Level maths - a lot of logical thinking and not much fun. So I put 'em away and returned to my tried-and-tested Chaos Marines. But now I have an urge (oo-err) to try the Eldar again, however this time running them as Exodites, that is, back-to-basics naturist Eldar (a bit like Tom and Barbara in the Good Life but with more Shuriken Rifles). My first draft list is: 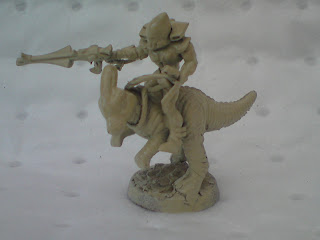 I recently faced an opponent using a similar army (though with real jetbikes, not Dragons as I intend), who started everything in reserve to limit the fragile Eldar from being exposed to too much shooting. His plan was to use the typical Eldar trick of bouncing his tanks around to give them 4+ or 6+ saves from shooting, and then on turn five use his jetbikes and skimmers to claim objectives.

I intend to do something similar, though I've included a suicide unit of Fire Dragons mounted in a Serpent to take out heavy armour, and an HQ Seer Council to strike against any opponent units I don't like the look of, accompanied and shielded by one of the Guardian Dragon-Riders units. The other Guardian Dragon-Riders will sit back with the Avengers (hiding in their Serpent), and will push forward to claim objectives on turn five.

That's the plan, anyway (they always seem so good on paper). Your constructive thoughts are always welcome!
Posted by Grazer at 15:28