Last night I fielded by 1500pt Tyranid army against Younger Graham ('Gripper') and his Dark Eldar flying circus, in a practise game for the forthcoming BoTCH tournament in July. Graham is a top guy, very friendly but a very keen competitor. Graham is, in fact, a member of the Scottish ETC team, and as such he presented me with a really strong challenge. The thing I notice about playing tournament players is the speed and concentration which they apply - playing Gra can be a bit of a whirlwind, and so I challenged myself to keeping up - both in speed and competitiveness - with a top player. 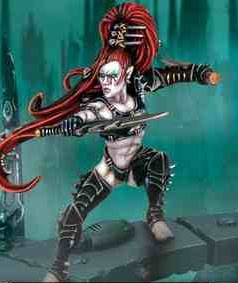 I think I've only played Dark Eldar once before, which was against Alex Brown (of From The Fang) soon after the new Codex was released. At the time, I remember Alex totally battered my Bugs with his big units of Wyches etc, and I formed an assumption that Dark Eldar are an elite close combat army. Well, last night I found out just how wrong that assumption was!

Graham's army comprised a couple of Raider-mounted Warrior squads, a couple of Venom-mounted Warrior/Wych squads, a couple of Ravagers and a few other bits, including the flyer (Void Raven?!). Being honest, it was a bit of a blur! We both set up fully in reserve, with half of my army podding in, with the rest rolling on from my board edge. With the Hive Commander rule, my units should arrive on a 3+ on turn 2, which is very reasonable most of the time. The mission was no. 3 in the BoTCH rulespack - 'Hold the Hill', where you win by having more scoring units in the middle of the table (9" radius). The set-up was Pitched Battle, though this mattered not as we both started from reserve. The game therefore started on turn 2, with Gra rolling for his reserves (on a 4+). He got a reasonable amount of his vehicles onto the table and moved them into a gun-line positionon his board edge. In my turn 2, I rolled for my reserves, but was disappointed by the results. I ended up with all my 'combat infantry' (Genestealers, Termagants, Trygon, Tervigon and flying Hive Tyrant) but none of my ballistic support! The two units of Zoanthropes and my 'dakka' Carnifex all decided to stay in their Mycetic Spores until turn 3. My mistake was to start conservatively - I was still labouring under the misapprehension that the Dark Eldar would move forward to get into combat ASAP, so I hugged cover on my own table edge.

Then the Dark Eldar started shooting...

All I can say is, Ouch! and Wow! The rate of fire that Gra was able to pour out was phenomenal, and quite unexpected. At the end of Gra's turn 3, he had taken out the Trygon, and whittled the Tyrant down to one wound, and killed off half my beloved Genestealers. On my subsequent turn 3, I knew I needed the rest of my army, and it reliably arrived (a 2+ on turn 3 for reserves is great!). Unfortunately my pods went a little awry, and instead of forming a shield-wall of three pods across the centre of the board (between two bastions) for my foot-troops to advance safely behind, the pods all scattered - two scattered 11" and one scattered 12" - all in different directions! Undeterred, my Zoanthropes and Carnifexes lumbered out and started blastin'. I then learnt my second lesson - Dark Eldar skiffs are made of paper! When you can actually engage them - either with shooting attacks or assaults - they fold very easily. My only problem was that I didn't have enough shooting attacks to take out all of Gra's vehicles, as he seemed to have almost a dozen on the table!

During turns 4 and 5, Gra concentrated on shooting my mostrous creatures and Zoanthropes, which I was quite pleased about. That allowed my surviving Genestealers and my one spawned unit of Termagants, along with the two remaining members of the starting unit, to sneak up the table behind the central bastion and to try and claim the centre of the table. By the end of my turn 5, I was feeling quite confident - although Gra had wiped out most of my Monstrous Creatures, all of my scoring troops (including the Tervigon, which I think Gra had forgotten was a Troops choice) were within 9" of the table centre, with only one of Gra's Warrior units there to contest the objective. All was going well, and I would win the game if the dice roll for turn 6 was a 1 or a 2. Unfortunately tough it was a three, and we continued into turn 6. Or rather Gra did, as by the end of his go, he had tabled me! He chewed through my remaining infantry with ease, and turned the game completely on it's head in one decisive turn.

So well done to Gra - he is a shrewd player, knows his army back-to-front,and thinks very quickly on his feet. As for me,the evening served it's purpose - I learnt a few things about the true nature of the Dark (Eldar) Side, such as:
In the near future, I'll be looking to continue searching out armies and opponents I've not faced before. In particular, I need some practise against Necrons, which I'm expecting to be very competitive at BoTCH in July!