Day One Review of ‘In The Veiled Region’ Campaign

It’s the end of day two of the ‘Veiled Region’campaign organised by the Animosity crew. I have to say that all of my hopes were well-founded – it was a great weekend, very entertaining and played in a friendly atmosphere!

Now, a recap of yesterday’s results. I will post the results of day two shortly...

Game 1 – 1000pts – 50% minimum flyers / jump infantry
In my first game I faced Matt who was using pre-heresy World Eaters. He had two Lightning fighters, a Whirlwind, ten assault Marines, a Land Speeder and a Contemptor Dreadnought. I was using two Vendettas, a Hydra, seven assault Marines, a Sanguinary priest and five Vanguard veterans (the latter three units allying in from the Blood Angels codex).
The game was quick and bloody! My Vendettas were very effective at targetting Matt's Lightning fighters, but it was Matt's Contemptor Dreadnought which proved the decisive unit. It's ability to pour out something like 9 or 10 shots per turn, either at my Marines (the 'poor bloody infantry') or at full BS at my flyers (if it stood still) was the game-changer. It was fun, but ultimately I lost as I couldn't effectively deal with the Contemptor before it dealt with me!
Game 1 result: LOSS
Game 2 – 2000pts - 3 objectives
In this game I was using my full 2000pt list (see above). My opponent Mike was using heresy-era Emperor's Children. He had two Hellblade fighters, a Storm Eagle, Terminators in a Land Raider, some possessed Marines, Fabius Bile and twenty cultists.

I started the game with my ordnance tucked up behind the Aegis Defence Line, some infantry in the battlements of a building, and my Chimeras lined up in a row, ready to shoot. I made short work of the possessed Marines on turn one, and on turn two my Storm Troopers arrived, which I placed in front of Mike's Land Raider. I hoped to blow the thing up, but unfortunately I failed. However, by placing the two units of Storm Troopers in front of the Land Raider, Mike had to use his Terminators to assault this flimsy speed-bump before he could get stuck into the meat of my army. 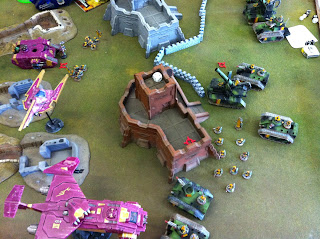 Meanwhile, all our flyers arrived! The game hinged around them, and soon the game climaxed in a massive dogfight between my two Vendettas and Mike's Hellblades and Storm Eagle. My Vendettas had the firepower to take out Mike's flyers eventually, and the game was pretty much decided when Mike hovered his Storm Eagle to allow his twenty cultists to disembark. I unloaded my Chimeras massed strength six shooting into the Storm Eagle, which blew up, killing around half the cultists - and a few Guardsmen as well!
Once the Storm Eagle had gone, my Vendettas finished off the Hellblades and my tanks wiped out the remains of Mike's army. It was another fun game, which ended in my first ever win via tabling an opponent. The omens were good!
Game 2 result: WIN
Game 3 – 2000pts - Kill Points
Game three saw me paired against an Ork Killa-Kan list, which was beautifully painted and modelled. The Ork army comprised a Lifta-Droppa, a Flakk-Truck, a couple of Mega-Dreads, six Killa-Kans, a Dakka Jet, Wazdakka and some bikerz, and a unit of Trukkin' boyz. 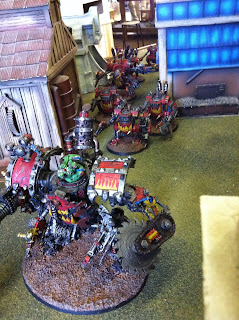 The deciding factors in this game were the board and the set-up. The board was absolutely jam-packed with tall buildings (we nicknamed it Stalingrad) and our deployment was Vanguard Strike; that is, triangles. With the Ork army having to slowly trace it's way through the maze of buildings, my ordnance had a field day in raining down indirect shells on the poor Orks' prized war-machines. By the time the Orks were in range to shoot, I had decimated all but the Killa Kans, but not before the Lifta-Droppa had played merry hell with three of my Chimeras! He lited one up and dropped in on two others, causing a total of eight hull-points worth of damage. This wrote off one completely (it suffered 5 hull points) and reduced the other two to 1 point and 2 points left respectively.
My opponent graciously called the game after turn 4 (it was tea-time...), so it was the second win of the day for my all-conquering Squats!
Game 3 result: WIN
Posted by Grazer at 14:52