This week I've mostly been considering how to improve my Squat Guard with the addition of some allies. I have reasonable armies of Eldar, Chaos Space Marines and pre-Heresy World Eaters (counting as Blood Angels) to choose from, and since I don't have the new CSM codex, I'm limited to either the pointy-ears or everyone's favourite power-armoured vampires, the Blood Angels. As you can probably guess from the title of the post, I decided on the latter!

The reason for adding the Marines is to beef up my ability to take and hold mission objectives. With the addition of the Priests' Feel No Pain bubble, the troops become hardier, and the Furious Charge really boosts the Assault Marines' effectiveness too. The Librarian* flies with the Assault Marines, and will either choose Smite, Blood Lance, Sanguine Sword or Unleash Rage, or possibly risk the vagaries of the random psychic powers tombola.

* A note on my selection of a Librarian in a World Eaters army. I realise that it's not fluffy, but it is a very effective HQ choice and frankly I need all the help I can get. So it's in.

Anyway, without further ado, here is my latest 1,850pt list for Blog Wars. I'll undoubtedly tinker more before the Tournament, but this is what I'll be using next Thursday against Andy's rejigged Tyranid horde: 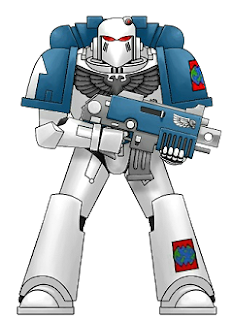 As always, I welcome positive comments and suggestions on how to make this army better. Cheers!
Posted by Grazer at 22:44