So as you can see if you look a little further down the page I was deeply disappointed with Prospero Burns. One poster on B&C shared a lot of my thoughts such as a major lack of Wolfage and so it was being discussed. Aaron Dembski Bowden was kind enough to share his thoughts on my observations.

His main observation on the book was this

I mean, for a lot of people, the Space Wolves needed a book like Prospero Burns. It gives the Legion credence. It makes them look, well, a bit more grown up. They needed something that wasn't about a Wolf Lord teenager and his ale-drinking Viking buddies who like the ladies and sure do love a good wild boar feast. I respect that people will have different opinions, but comparing the language quality and storytelling of Prospero Burns and the old Space Wolf novels actually sort of alarms me. Give 100 sci-fi fans a copy of both Prospero Burns and, say, Ragnar's Claw or Space Wolf, and I suspect you'll find a significant percentage consider PB as an excellent novel, and the old Ragnar stuff to be a little, uh... well... simple, perhaps, and almost definitely targeted at a younger age bracket. That's not to say that one is right and one is wrong, but they were written with different audiences in mind, when the publisher itself was in a very different situation.

And its certainly a valid one, The Horus Heresy is a New York Times topping series selling over a million copies. The Black Library has moved on from a time when it was written specifically to entertain gamers however his comment still doesn't absolve of what I think the real problem is with this book, the pace.
As time goes on and more people finish the book I have realised that if you liked Legion you will love this book. If like me Legion was only remembered for the revelations and the spoilers rather than the plot line then you probably won't enjoy Prospero Burns.

I was also lucky enough for Aaron to answer another question I had asked along with Chris Wraight author of the up and coming Space Marines Battles book Battle of the Fang. 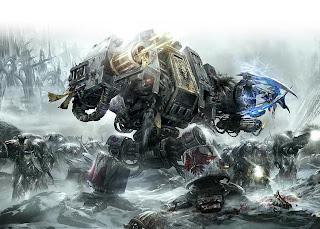 As regular readers of the blog know I am an avid Science Fiction reader and author that 40k books and the books of David Webber (if you haven't read it read Mutineers Moon best Sci Fi book ever IMHO) there is a massive collection of Star Wars EU books.

I knew from reading interviews with some of the Star Wars authors that there are times when specific things have to happen and they have no say on it. I am sure I read that when it came time to kill off Anakin Solo in the Vong war that the author vehemently argued against it but was still ordered to by the publishing company and I have always assumed that Black Library were the same. At the beginning of the book they lay down a plot and key things that have to happen so my question was thus 'There is a slight spoiler to First Heretic in here'

Q - I've always wanted to know with all Black Library authors how much the stories main details are already decide? Because there is no way that an author can just include such a massive spoiler such as The Ultramarines absorbing the missing legions without Black Library's say so.

A- ADB - Practically no details are already decided, unless it's a famous battle, or something. (In regards to the First Heretic revelation) Well, you probably shouldn't believe that, dude. The characters in the novels are just making guesses, or hinting at an unknowable truth. It's possibly true, sure, but as it stands right now, GW won't reveal the truth about those Legions; all hints in the Horus Heresy series are just possibilities. Black Library never tell us to do anything. That's not really how they work. They check facts, and where the Horus Heresy is concerned, we have regular (long) meetings to discuss the series with Games Workshop's Head of Intellectual Property.

A - CW Hi Simo. Not much to add to ADB's post further up, really. As he says, there's a lot of freedom there. BotF had a couple of restrictions which gave me a few headaches, mostly involving numbers and timing (like the siege lasting 40 days, etc.), but in terms of characters and the unfolding of the action, we get a fairly free hand.

The complete interview can be found here

I certainly didn't expect authors to have that sort of free reign which can certainly be construed as a double edged sword. Yes they have the freedom to tell the story as they wish but they also have the freedom to balls up significant events the biggest one in my mind is Nikea. It seems to me that we have gone from a ban on Sorcery to a ban on Psykers. How is the Imperium of Man surviving without Psykers and when did the decision get revoked? Hopefully questions that will be answered later.

In all I would like to thank these two authors for addressing these points and I look forward to seeing the next Night Haunters book from Aaron and Battle of the Fang from Chris.
Posted by Unknown at 08:47