Suffer Not The Alien to Live 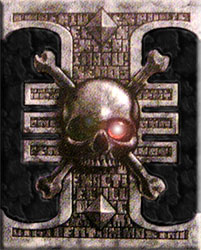 Ever since the Deathwatch first appeared back in 2002 (ish) I've really liked their background and theme. Small elite teams of Space Marines hunting down aliens and changing the course of a war. Unfortunately they are the only arm of the Inquisition that didn't (and probably never will) get a Codex. On top of this they haven't had many stories written about them, and the ones by Goto have been burned from my mind by expensive therapy...damn you and your multi laser!

So, never having a proper Codex meant I never got around to making a proper army of them. I toyed with the idea a few years ago when the Space Marine Codex had the trait system, and powerful Librarians and Drop Pods came into the game. However, being at University I never made more than a squad as I simply didn't have the time, and had a marine army already (Salamanders...yes I played them when they were I3 and didn't need some jumped up blacksmith).

Fast forward several years to the current Marine Codex and I was over joyed at the sight of Sternguard Vets and whats more Pedro making them scoring. The Sternguard had what made the Deathwatch squads in the none tournament legal "Chapter Approved" book unique, special issue bolters/ammo. However, at the time I was in the height of all things green (and still am) with the Orks being released earlier in the year, on top of this I still had my Salamanders.

Jump foward now to March of this year, I'd sold the Salamanders, was coming back from deployment in the Arctic, and had a tournament to attend in approx two months that I wanted to take a new army to. While out in the middle of the frozen north (not Northrend for you WoW players!) I had a couple of Codex with me to try and build a 1750pt army with but couldn't decide what I wanted to do. I knew time would be short, and therefore would have to be small and Elite, so marines made sense....but what flavour?! Then it hit me, I could finally do my Deathwatch.

Being black marines, basically meant I could sort of justify building an all Codex army to run under Wolves, Marines or the one I finally went with.....Witch Hunters. I settled on that because I'd never played against it and wanted a challenge. I thought about taking Codex Daemon Hunters, but it was just too restrictive, only allowing one inducted Dread/Speeder etc, so I chose my HQ and Troops choices from WH as required and then inducted every marine I could squeze in!

Inq Lord with (old school, whole table) Psychic Hood and his bare fists with a trust map of the battlefield (aka. i didnt waste any more points on him!) but gave him a body guard of 3 veterans with plasma guns, and then mounted them in an 85pt+ Chimera with a dodgy 2 fire point top hatch! Gotta love Codex creep!

Callidus Assasin (modeled as a kroot, for the xenos feel)


10 x Marines in a Drop Pod with multi-melta, melta gun, combi-melta and power fist (guess what their job was)

5 x Scouts with cloaks, snippers and a missle launcher.

Dread in Drop Pod with HF and MM

Dread with Twin Lascannon and HF

So, as I said, mainly marines with the Ordo Xenos sprinkle on top. It did ok, nothing great. My aim was to finish in the top 40 players as it was a new army that I'd never play tested, it was an old codex, and I hadn't played in over a year. As it turned out I came 23rd iirc which I was more than happy with.

I played with it a bit more over the summer and i actually started to learn how to use it a little better. When it came around to the next OW I entered last minute, and as it happened it was the only list I had on my PC and didnt have time to write a new one...and so it was the Deathwatch and I went to war again, my only aim this time was to finish higher than I did the previous tournament...and I did. I came 13th over all, just missing out on the top ten.

Well, this is turning into quite a long post now, so I'll end it here. But stay tuned for Part 2 later this week, hopefully with some photos of my army, and my thoughts on running this under Codex Marine and Puppies.