Thats right boyz and grotz of all ages. TheBaron is back with his weekly post just like he said he would be.

This week I want to talk about Biovores. No I haven't been hitting the "Christmas Spirits" early...well I have, but no more than usual! I actually really like this unit for a couple of reasons but before I get to why I like it, lets have a look at the unit itself, as I'd be surprised if many of you have come across them in 5th. 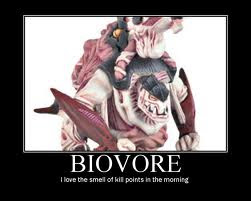 Well for 45pts and a heavy slot we get a 2 wound T4 beastie with a a 4+ save and a "big" gun on its back. Its initiative, attacks and lurk reinforce that this is not a combat creature like most of the other things found in the Nid Dex. For similar points you could get a warrior with lash whip and bone sword, or an extra all powerful, and rightly feared, Pyrovore (ok, that was a joke). Added to this its a pretty easy kill point to give away, takes up the space of a Trygon and the strenght of its gun is also somwhat lacking.

Now while I admit it can be an easy kill point (only 1 in 3 from the normal missions anyway) if shot at or assaulted it will generally require an outflanking unit to get them as other targets will present more of a threat from shooting, and it should be deployed as close to the cnetre of your line anyway.

So why do I like it so much, and think its underrated. Well, firstly it has the longest range gun in the Nid army. To get something with the same reach you have to pay 7 times as much in the form of a T'fex and its rupture cannon and both are aimed at different targets in any case. The gun itself is pretty nifty for its abilities outside of the range. While its strength may leave a little to be desired its Ap is as good as anything you usually see the Nids use (when did you last see Bio-plasma), it's Assault meaning you can fire it when you come on in DoW, its Large Blast so you can thin out some hordes or units camped in cover and finally its Barrage. Now this last point is key to why I give it so much value.

First of all it lets you hide your "easy kill point" behind terrain, which considering its size is pretty easy to do on most tables. Secondly, with the abundance of cover saves in 5th ed this negates it somewhat, so you can freely fire away at that Ork mob charging down field and not worry about your gaunts giving them saves. Thirdly, on top of all this it causes pinning by nature of it being Barrage (somthing else which is often over looked).

Now barrage does have its drawback when fired indirectly, you can't subtract the BS of the model to reduce the range. For normal guns like mortars etc this means the shot only has a 1 in 3 chance of doing some damage as if a scatter is rolled out of LoS the average as we all know is 7" (no pun intended). However, due to the living bomb rule this is not the case for our underdog.

This one rule means that even if the shot misses by more than 6" (remember the average?) then a number of spore mines land where the shot should have and then drift around causing havoc for the rest of the game. This disruption can be invaluable as it causes your enemy to either divert some shooting, avoid moving towards them or suffer the consequences. 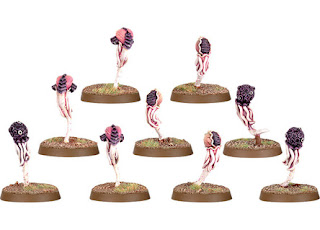 So putting this all together we have a unit that can hide at the back of the field giving some long range anti-personel fire support to your advancing horde. It removes cover saves, can disrupt an enemy's plans and just be a general annoyance. It's an ideal weapon to fire at long fangs and other small squads camped at the back near/on objectives....such as small gaunt squads spawned by a tervigon in turn 5 that you normally have no hopes of reaching.

Finally, it's unknown. By the very nature of it being an underdog your opponent may not know what it can do and you should never underestimate the psychological effect this can have. All it takes is for one good round where it kills/pins one of his squads and he'll divert a disproportionate ammount of assets to try and neutralize the "threat". For 45pts, take a punt and try one...

As usual this is all just my opnion let me know your thoughts.