the first is simple

Q: Are Wounds from Dangerous Terrain tests allocated
in the same way as shooting attacks? (p14)

A: No. Each model moving through dangerous terrain
must take a test. Each model that fails takes a Wound

I do try and emphasise to opponents that that's how it is played however some people still insist on taking it on the squad and then allocating so its nice to be clear on this one. 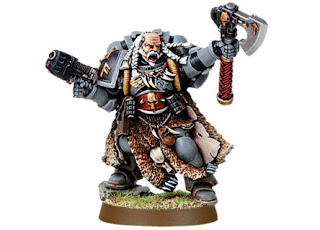 The second is this one from the Grey Knights FAQ

The reason I think this counts is that I have had debates at tournaments about what classes as a daemon with opponents who are generally using Greater Daemons from the chaos codex, does a Rune Priest wound on twos RAI I think yes but there is the space for a bit of lawyering that some do seem to enjoy.

So what do you think Claws and Fists readers as a Wolf player can I point to this section and tell them what constitutes a daemon even though it isn't from my FAQ?? Can my Rune Priest now wound oblits on twos??

As always your contributions are most appreciated.

So suddenly you have to hit with Jaws which is specifically stated to be a psychic shooting attack? Really GAHHHHH
Posted by Unknown at 18:22