As mentioned yesterday, we all went down to Warhammer World to play a big game. And boy, was it ever a big game. As you will have seen, Andy went with the Blood Angels to partner with Graham's Chaos Space Marines. Initially, we started with my 3000 point army versus 1500 points of BA and CSM while we waited for Mick to arrive. The plan was that once he turned up, he'd reinforce me and Andy and Graham would reinforce with the other half of their armies...

Logan and his Long Fangs dropped in, split fire on two Land Raiders and did a grand total of nothing. The only good thing that I actually managed to do was force them to really bunch up all of their vehicles in order to give cover saves to their Raiders. Then, Mephiston charged into Logan and we've seen how that ended. Just as this was happening, Mick turned up and we decided that since we hadn't finished turn 1, we might as well start again.

Rules-wise we decided that we'd have 6 Objectives each worth 2 points, then we'd have normal Kill Points and also each team would have to pick a Force Leader who would then be worth 3 additional points. These wouldn't be revealed until after the game. We won the roll-off to go first (thanks Bjorn!) and placed our three Objectives pretty much in the middle of the board. They placed two pretty similarly and then placed one as far away as possible from us. Which was about 12 feet away. Graham then placed about a third of his army into Reserve (no prizes for guessing what their mission was)

This time I dropped the Ven Dread and the Rune Priest with his four Combi-Armoured friends. The Dread wrecked a Defiler which then provided Andy's Devastator Squad cover for the rest of the game. Meanwhile, the Priest split off from his squad. The plan was for him to blow up a Rhino with Living Lightning while the squad killed the Obliterators, thus depriving the enemy most of their long range shooting. Of course this didn't quite work out, with the Rhino driving off un-scratched and one of the Oblits surviving. Unfortunately, due to it being a very long day where I took no notes and very few photographs that's about the only player turn I remember with any clarity. However, here are some of the highlights/lowlights:

Bjorn spending most of the game Stunned or Shaken.

Andy's Death Company not being able to fit on the ledge containing Mick's Long Fangs and so spending a couple of turns stood on the ground beneath them raging at them.

The combat between Mephiston and Mick's Wolf Lord - The Lord made something like 5 3++ saves before causing fours wounds on Mephy and sending him running away.

Logan's Long Fangs actually blowing up a Land Raider and then surviving the charge from the Assault Terminators inside.

Arjac's Drop Pod getting misplaced so that they spent three turns running around and still got nowhere near being in the game.

Logan eventually getting cut down by a full squad of Khorne Bezerkers.

Those same Bezerkers consolidating into a crater and then getting hit with 4 Frag Missiles which killed 7 of them.

That being the only thing that my Cyclone Missile Launchers did all game.

14 Blood Claws not being as killy as advertised.

A Wolf Scout blowing up a Dreadnought using Mark of the Wulfen.

And then the big one. It's the end of turn 5. If you total up the points, it's about even unless someone has killed the enemy's Force Comander. There are a couple of ongoing combats but they're not going to make any difference to the outcome of the game. Andy decides that Mephiston is going to try and charge a Land Raider and destroy it with his Sanguine Sword. First, though he casts Wings of Sanguinius. He passes the psychic test but while I'm rolling for Njal to cancel it, I point out how funny it would be if he'd suffered a Perils of the Warp attack and lost his last wound. Njal dispels it. Mephiston makes it into base to base despite a poor Fleet roll. He tries to cast Sword. He passes his test but Njal dispels. He tries again - double 1! To add insult to injury Njal cancels that too so he dies without even getting to attack the Raider. One more point for us. Plus he's their Force Commander. 3 more points to us and of course these are the points that win us the game! 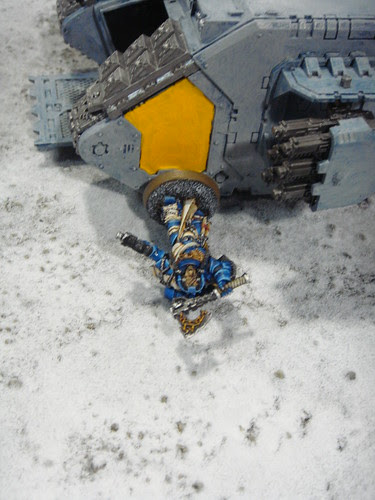 Mephiston kills himself trying to crack open a Land Raider 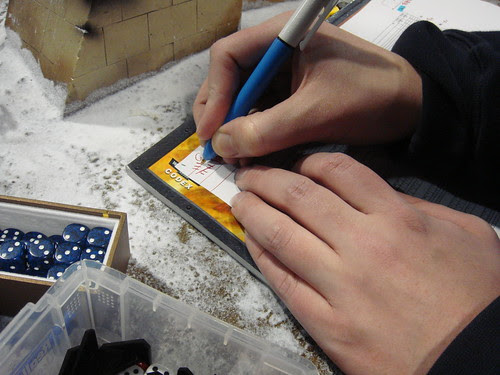 (In case you were wondering our Force Commander was Bjorn since he's hard to kill and if you manage it, you get another Objective to claim)

All in all we had a great day even if it was long and even if I did have to listen to Andy and Graham talking about Metal bands that I've never heard of on the way to the after game curry (and violin featuring folk on the way back!) It did make me realise the importance of deciding what you want out of a game before you play though. I had visions of my heroes getting stuck into epic combat with arch-villains, just like in the initial skirmish. However, with the Objectives, it became more like a standard game of 40K which meant in the end of good portion of Graham's army ended up doing nothing. Given how close the game was, this was probably a good thing for us as they could have ended up claiming more than the 2 points they did if they'd been involved in the combats in the centre of the table. Combat was perhaps the other problem with the armies starting a little bit too far apart. While the Thunderwolves got into combat pretty early, the main assaults didn't start until turn 5 when we would probably have liked them in turn 3. Due to the size of the table a lot of our shooty units were also out of range for the first couple of turns (we should definitely have taken the 8 Rune Priest list I initially suggested - 8D6 S7 shots a turn is not something to be sniffed at) So, perhaps a couple of tweaks needed to make it run just a little bit smoother.

From a tactical point of view, we completely ignored the Objectives. I think it was luck that we claimed one at the end and we ended up with a Rhino full of Grey Hunters 4 inches away from another which would have made Mephiston's little accident funny but not game winning. We were also pretty poor at finishing things off. We immobilised about 3 vehicles that were still left on the table at the end of the game plus we left Mephy walking around with just one wound left. Ah well, at least we had fun!