Nobody puts Willie in the corner! 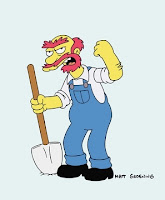 The next big dance is clearly on the horizon in the shape of the Caledonian Uprising at the end of January. The lists have been submitted and now I have a few painting projects to put to bed between now and then so I thought I'd run the list past you all and show you the amount of work required to finish it off. Rather than do the normal structure I thought I'd post some pictures of the squads I'm planning on taking and talk a bit about the work required to finish off the army to table-top standard. Afterwards I'll talk about the changes I've made to the list (I'm all about the last minute changes) and my thinking around those changes. 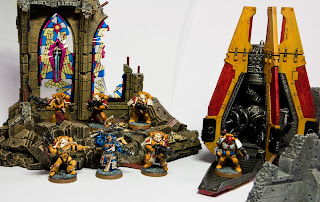 First off we have my Librarian HQ, a Sanguinary Priest and 5-man Sternguard Squad with 4 combi-meltas and a Drop Pod. Fully painted and ready to go, we're off to a good start. 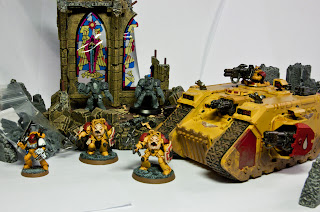 Next up is the Assault Terminator Squad with their Land Raider Redeemer and the second Sanguinary Priest. Three Lightning Claw Terminators left to paint, one of which is not yet built thanks to some missing legs in my last bits order! I love painting Terminators so not too much to worry about here. 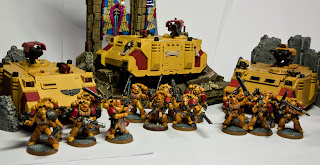 Ahh, the Troops, two 5-man Assault Squads with Meltaguns and Power Weapons mounted in Las-Plas Razorbacks. A third Assault Squad, bare-bones, mounted in a Twin-Linked Lascannon Razorback. Just a few finishing touches to put to the Las-Plas Razorbacks and these guys are all done, however there's a complete lack of Gryphon Sepia in the UK at the moment for some reason, so I'll have to sit tight before I can get a wash on these vehicles. 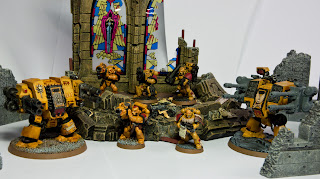 So overall I have 3 Lightning Claw Terminators and two Dreadnought arms yet to paint. I also have two Las-Plas Razorbacks and two Missile Launcher Devs to finish off, all in all very achievable in 4 weeks, especially with Christmas around the corner.

I decided to drop the Honour Guard from my previous list because I just don't think I'm comfortable using them yet so, in line with my advice to myself after the Freebootas Open I'm not including them. In their stead I'm adding a Sanguinary Priest to accompany the Termies.

Dropping the Terminator Armour off the Librarian allows me to fit in a squad of Sternguard in a Drop Pod. I have to say I'm more comfortable with this unit as a one-shot anti-tank threat or dropping them mid-field in a support role as the situation dictates. Because of the speed of the Blood Angels the Sternies will not be isolated if they are dropped mid-field so I think they can be well used in either role.

Because the Librarian no longer has Terminator Armour and a Storm Shield I don't think he can really play a part as a dedicated assault unit so I've given him Fear of the Darkness which I think is a great opportunistic power that could be useful in a number of units and makes his something of an anti-personnel threat. For his second power I was leaning towards Blood Lance but I just don't think it's all that good so in stead I'm going for the Sanguine Sword. It's a deterrent power more than anything else and will also make him pretty handy against any tank on the board, who doesn't love strength 10 weapons?

Anyway, that's it for now, I'll post revised pictures once the rest of the work is done and if you feel moved to comment in the meantime I'm all ears!
Posted by Unknown at 10:00