Setting goals? Not too SMART! 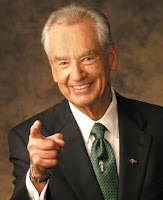 I've not written a “resolutions” post so far this January and I had no intention to, but in planning this post that's exactly what it's turned into. So why fight it?

Thanks to my very understanding wife, it's been a bit of a 40k weekend this week, which, given the fact that it's the Caledonian Open next weekend just makes my missus even more awesome. So, on Saturday I had the dubious pleasure of being schooled again by our very own TheBaron, his Orks easily steamrollered my Blood Angels. It made obvious the very real gap that I will have to bridge if I want to be competing at the top tables of the tournaments that I attend. Fortunately for me, at the moment I think I have more fun in the lower leagues, however I'm going to set myself a target of improving on my tournament results of 2010 which were as follows:

Right at the start of the year I played in the Gobstyks Tournament up in Lincoln where I finished 5th out of 20 players, a result I was very pleased with. It consisted of two big wins over 'nid players, early adopters of the brand new codex, and a big loss to Harry and his four Battle Wagon Ork list o' doom!

Next up was Warp Storm 2 at Maelstrom where I placed a slightly disappointing 15th out of 22. This time I was the early adopter taking along a cobbled together Blood Angels list which I had never played before. This, we all know, is a recipe for disaster. I managed to scrap out a result from the bottom tables but by no means was a competitive force on the weekend, I lost to Daemonhunters, IG and Blood Angels, beat Orks and Eldar and tied a game with Eldar.

At the end of May was Open War 13, this was only a few weeks after Warp Storm 2 so I decided to go with a list I knew and took my Lysander/Sternguard Space Marines list. I love Sternguard and have pretty much had them in my main list since I started playing again in September '09 and while I'm not great with them I knew the list a lot better than I knew the Blood Angels one. The result bore this out and I finished 18th out of 70 players, drawing to Daemons and IG players and tabling another Marines player in the last game to shoot me up the rankings in the last round.

My last tournament of the year was Open War 14, this time no Special Characters were allowed so I decided to take some Assault Terminators to bulk up my list, I finished 19th out of 66 players and my path through the tournament was similar to OW 13. I started off with a minor loss to Harry's Orks, having played them before in the Gobstyks tourney at the start of the year I felt I had a better chance this time round and I managed to keep it close but his weight of numbers got me in the end. My next game was another narrow loss to a Blood Angels player, I absolutely mullered him but took my eye off the mission and gave it away, fortunately the amount of kill points I took kept it close. Finally, everything went right for me in a game vs IG which I won comfortably and again I jumped up into the top 20 (just!).

With those four tournament results recorded in 2010, RHQ ranks me as 47th in the UK (I checked this time guys). Now what this actually means is highly debatable as our very own contributors TheBaron, Simo and the boss-dude himself, ClawsandFists are ranked 111th, 344th and 392nd respectively and I am not a better player than these guys. However a goal I'm going to set myself for next year is to improve my tournament ranking in 2011. But perhaps more tellingly I'm going to set myself to goal of winning more than half of the games I play in any one tournament in 2011 and just to qualify that, the Tournaments I intend to enter this year are the Caledonian Open, Open War 15 and 16, and Warp Storm 3, so no easy rides.

Obviously I'm not going to be hugely upset if I don't achieve this, the target is aspirational as I'm not a particularly “hardcore” player, neither am I very tactically astute, non-the-less I will be pleased if I can achieve either one or both of these goals.

In terms of hobby related targets I think the following picture of the current state of my painting desk sets the scene nicely: 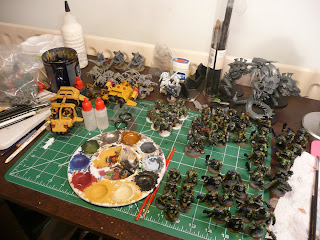 You can see here the gist of what I intended to accomplish in 2011. On the left of the pic we have a few odd yellow Marines units so I'll no doubt the tweaking and adding units to what I consider my main army. However the bulk of the right of the picture is dominated by Ork Boyz perfectly reflecting the fact that I intend to finish painting my 1750pt army plus a few extra units to take it up to 2000pts worth. Also in the pic tucked away along the top edge is evidence of the project which may roll into 2012, my Nids. I hope to have 1750pts purchased and built before the end of the year but the painting is likely to take me into next year … still you never know when the muse will strike!

In terms of definite hobby targets for 2011 it's got to be to have a fully painted, 1750pt Ork force, and to honour this commitment I have already started painting the Boyz again. In fact the nine Boyz you can see in the middle of the pic with the white bases will be finished this week and that leaves just another 11 models until all of my Ork Boyz are painted, that just leaves, my Killer Kanz, Lootas, Deffkoptaz, Kommandos, some form of Nobz (Bikers or Mega Armoured), Grots and a Trukk! That's what's so disheartening about Orks, I thought I was doing well with just under 100 Ork Boyz painted there's still so much to do!
Posted by Unknown at 16:00